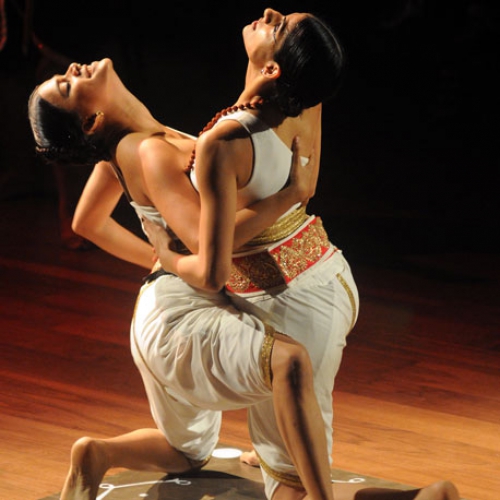 Shikhandi: The Story of the In-betweens

Shikhandi, a character from the Mahabharata, is perhaps one of the earliest trans-genders known in mythology. Shikhandi was meant to be born male to avenge an insult in her past life as Amba. But she is reborn female, raised male, has a sex change on her wedding night when she runs away into a forest, and finally fulfils her destiny – to be the cause of Bhishma’s death. A comic, tongue-in-cheek retelling of the story of Shikhandi, mixing the traditional with the contemporary, the play questions maleness, femaleness, and everything in between. The play was a runner-up at the Sultan Padamsee Playwriting Awards 2016, and was also awarded the Laadli Media Award for Best Play in 2017.

Shikhandi: The Story of the In-Betweens has been in the making for several years. I was reading the Mahabharata a few years ago and also read Devdutt Patnaik’s The Pregnant King, and was really taken in by the story of Shikhandi; so I created a 20-minute, one-woman performance of it in 2010 in Berlin. The story has been simmering in me ever since; eventually I wrote the full-length version in 2014 to submit to an international playwriting competition. Not much came of that submission except that I had a first draft of a really fun play. I asked some friends to read it and people loved it. I continued writing and re-writing.

The story of Shikhandi is one that is important to tell in this day and age. It reminds us that transgenders have always been a part of our society, our history and mythology. Yet today transgender people struggle to be accepted in society for who they are. Shikhandi is a retelling of a myth, using traditional forms but with a very contemporary text. The idea is to challenge and question our current stereotypes around gender and sexuality: to ask of ourselves who we really are. Perhaps we can then realize we are all in-between: not only in gender and sexual preference, but comprising both good and bad, tradition and modernity, here and there, East and West, black and white: perhaps everything. The sooner we accept this fluidity within us, the easier it will be to accept people for who they are.

As the play says: “I’m the sublime, I’m the timeless, I’m all the universe encompassed.”
– Faezeh Jalali