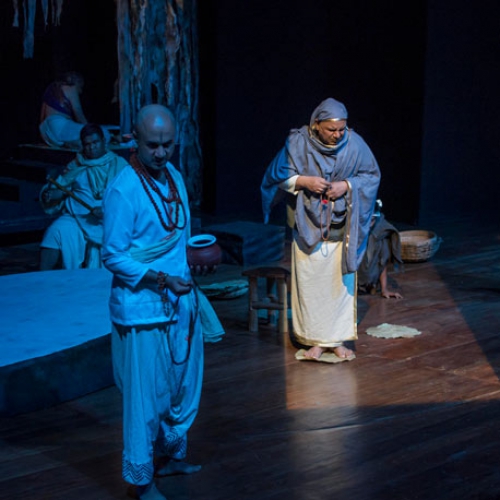 This play is set in the 8th century, in a Matha (Hindu monastery) at a time when the Buddhist Pala kings were the dominant rulers of Northern and Eastern India and mass conversions to Buddhism were widespread.

The story explores the conflict between two diverse ideologies represented by two protagonists pitted against each other.

The head of the Matha, ‘Nath Nand’ is soon to retire. Nath Nand, who has always separated religion from politics, is faced with a dilemma. Which of his students shall be his successor? Will it be Yuyutsu, who believes in reform and opening the doors of the temple to the lower castes? Or Agnivesh, who believes in raising an armed resistance to Buddhism?

Muktidham, performed by the Indian Ensemble is about plurality, synthesis of divergent views and the possibilities of coexistence in life. This collaboration, spanning over two years between the different departments and artists was enriched by the multiplicity of ideas, opinions, tastes and technical skills.

The other key element of this production has been the engagement with – historical, social and theological concerns of Hinduism. What is that leads the right wing political ideologies to eventually turn anti-intellectual despite their rational origins? The play examines the recent rise of right-wing politics and its precarious relationship with educational institutions.

And finally, this is a play about believers across the spectrum and the elimination of the correlation between fundamentalism and belief.  The play questions aspects of caste in Hinduism as elaborated by Dr. Ambedkar.