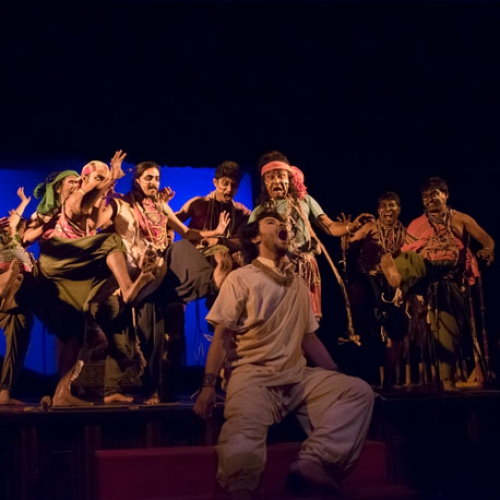 Moimonsingha Geetika is a Bengali folk ballad which envisions a society that allows women to love freely.

The play tells the story of a girl, Mahua, the daughter of a Brahmin living in Gara mountain, who is kidnapped by a group of gypsies when she is only six months old. At the age of sixteen, she falls in love with a prince called Nader Chand. The gypsy leader Hoomra is opposed to this and orders Mahua to kill Nader Chand. Mahua kills herself instead and later the gypsies kill Nader Chand. Mahua’s story is an eternal tale of love and loss and the unassailable strength of a woman.

While reading Moimonsingha Geetika, the balladry of Mohua and Nader Chand inspired me very much. We have performed many serious political and social plays dealing with complex problems of adult existence. The ballad of Moimonsingha Geetika explores human complexities as well as love, the purest form of feeling treasured by mankind. This story speaks of the ideals and norms that society holds important, the meaning of differences in social status and their effect on human relationships.

Love which inspires all nourishes all too, from a prince to a gypsy. Our sole task in presenting this play was to capture the essence of that love which pulsates at the core of this tale. The performance style follows traditional story-telling patterns fused with popular Western movement forms along with folk-tunes and is thereby transformed into an organic whole which conveys the spirit and soul of poetry.