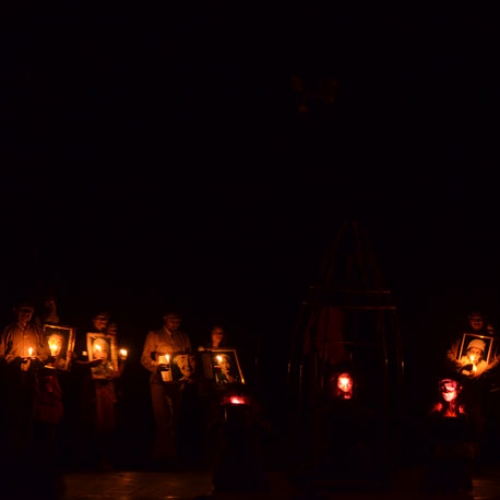 War has always been one of humanity’s most tragic truths causing not only soldiers to suffer physically on battlefields but also unleashing deeper invisible wounds. The terms “comfort women” refer to the “Korean Comfort Women”, victims of the cruelty of Japanese imperialism during World War II, who brought out their tragic secret to the world in the 1990s.

This play tells the untold story of the abuse by Japanese soldiers in eastern India during the same war through the plight of Sarengla, a village girl, who too loses her dignity to war and to the brutality of the Japanese army; it chronicles her struggles of abuse and survival and of the child which grows in her womb. War begets war and the Second World War sets off another war in Sarengla’s life – that of staying alive.

Comfort Women is about the history of forced prostitution by the Japanese during the Second World War. During World War II as many as 200,000 women, commonly called “comfort women”, were forced into prostitution, brutally beaten, raped and held prisoner throughout parts of Asia under direct control of the Japanese military. After continuous studies and rigorous research on the topic for three years, the idea of the play was conceptualised.

Sarengla, the protagonist, was modelled from Dr. Birendra K. Bhattacharjee’s evergreen novel Earuinggom and her journey has been explored through the play. It is an attempt to discover another thousand Sarenglas.