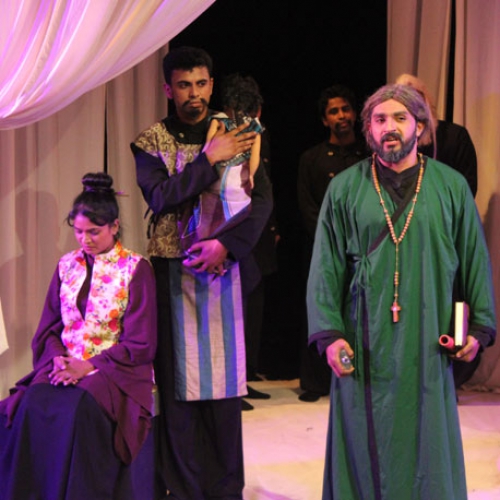 Caucasian Chalk Circle, a play originally by Bertolt Brecht, is the story of Grusha, a peasant, forced to flee a Caucasian city as a result of a revolt. She saves the abandoned child of the city’s governor who has been killed and develops strong maternal instincts towards the baby. She crosses dangerous hurdles and makes several sacrifices for the sake of this child.

After two years, a counter-revolt returns the governor’s party to power. The governor’s widow can only stake claim on his estate as the mother of his legal heir. Grusha and the infant are thus tracked and brought by soldiers to trial before the city judge, Azdak, who uses something called the ‘chalk circle’ to judge the identity of the “real” mother.

On 27 August 2017, a shocking piece of news flashed on TV: “Mother throws her 7-year old daughter off a building, twice!!”  I discovered that the incident took place two roads away from my residence! It haunted me for days.

I recalled Natella Abashwili, the mother of Michael, in the play Caucasian Chalk Circle by German modernist Bertolt Brecht. The play is a parable about a peasant girl who rescues a baby and becomes a better mother than the natural parents. In turn, Natella, the real mother had left her child behind while fleeing from her palace and after a few years wanted the child back for her greed.

This incident instigated me to direct Caucasian Chalk Circle. The play enforces a new feeling to motherhood- emotional, rather than biological.