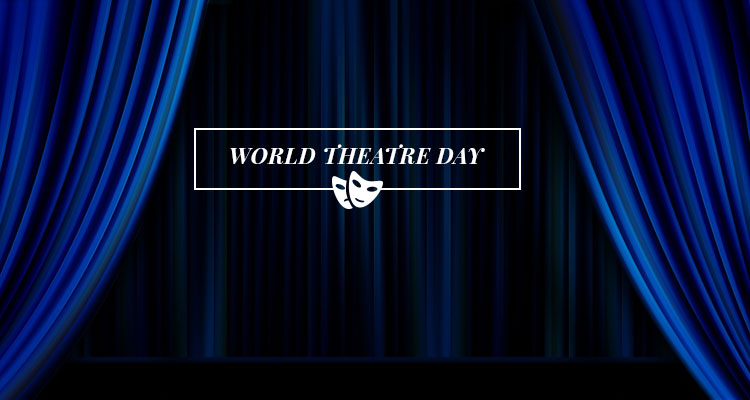 When I think of theatre, the words of a much-loved classic, made immortal by Frank Sinatra’s honeyed crooning - Love is a many splendored thing - come to my mind. Theatre too, like love, is a many splendoured thing – it is, for me, art’s way of giving reason to many amongst the living and indeed “a golden crown that makes a man a king!”

Today, the 27th of March, is the World Theatre Day, the 57th one in fact. It is a day when International Theatre Institute (ITI) Centres from across the world, along with ITI Cooperating Members, theatre professionals, theatre organizations, theatre universities and theatre-lovers come together to celebrate this truly exhilarating art form. It is a day when theatre practitioners, those who can see the value and importance of theatre, reaffirm their faith in its powers and prowess. It is also a day which is supposed to act as a catalyst for governments, politicians and institutions to wake up and recognise what the stage can do, not just for individuals, but for the economic trajectory of nations.

In the words of Brett Bailey, Stage Director from South Africa, World Theatre Day Message Author 2014, “We gather to weep and to remember; to laugh and to contemplate; to learn and to affirm and to imagine.” These are powerful words – and words which convey the essence of theatre. Theatre unifies, inspires, evokes, adds to discourse, strengthens opinion. Most importantly, it is a coming together of people in order to emote – people who are on stage, those who are behind the stage and those who sit in front of the stage. And coming together is what volatile and divisive modern societies need more than any other balm.

What politicians need to understand is theatre’s acute importance in the scheme of employment and commerce. From major metropolises to small towns, research shows that the arts and culture industry has a strong economic backbone. It attracts audiences, buoys businesses, supports jobs and generates revenue. What governments need to figure out is that the arts can mean business. Attendance at theatre shows generates ancillary businesses for restaurants, parking garages, hotels and retail stores, in addition to the cost of admission. The Broadway theatre district in Manhattan, New York City, is central to the theatre industry in the US. About 40 theatres operate within this area, each with more than 500 seats. During the 2017/18 theatre season, the revenue of Broadway shows in New York reached approximately 1.7 billion US dollars. This study lays to rest a common misconception: that communities support arts and culture at the expense of local economic development. In fact, it is the opposite. Local and national governments are actually investing in an industry that supports jobs, generates government revenue, and brings in tourism.

What is alarming is India doesn’t even tabulate statistics such these for its stage - there is no national data on theatre and neither are there designated theatre districts. One of the world’s oldest art forms, an art which has breathed vitality into everyday life since the time of ancient civilisations, and a part of our country’s glorious treasure trove, begun as early as the 1st century CE, theatre needs to be preserved, sustained and nourished as a pledge by governments, foundations, corporate and business houses and of course by audiences who are the stage’s strongest patrons.

The 2019 Word Theatre Day Message Author is the renowned Cuban theatre director Carlos Celdrán, whose Argos Teatro has breathed new life into modern European theatre, with performances of Brecht, Beckett, Ibsen and Strindberg bringing European culture to the doorstep of a Latin American audience. Let us follow by example and keep the faith that quality theatre can be brought to audiences across the world with more fervour and frequency.

The multi-faceted Jean Cocteau was in my mind a real Renaissance man. He summed it up just right when he penned the first World Theatre Day Message in 1962, “Real admiration is not engendered by the communication of commonly held ideas or opinions; but by the sharing of ideas which are not our own, and the sharing of them to such a degree that we come to believe we could even have been their author. So, it is a form of love: because, in love antagonisms marry each other; and is not the function of the theatre the best example of OSMOSIS-that natural process of vital absorption? For after all, the greatest interpreter is the one who gives the impression of making it all up as he goes along, inventing and improvising his part to suit each individual in the audience.”