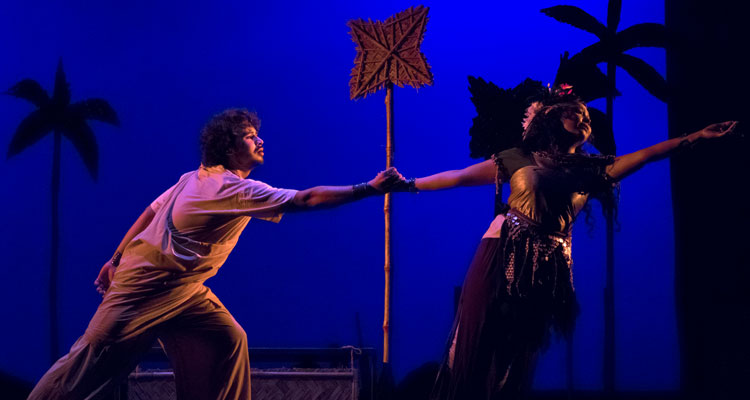 Moimonsingha Geetika, the Bengali offering on the final day of META 2018’s weeklong showcase of nominated plays, took me by surprise. I had gone with feelings of ambivalence – a folk-ballad written hundreds of years ago set in untamed rural Bengal, a plot of star-crossed lovers rendered largely through earthy songs in pure “Bangal” dialect: would it appeal to my generally urbane and complex sensibilities?

I must confess I found this Goutam Halder’s directed and Naye Natua’s performed musical rather engrossing. The Director says in his note, “Love which inspires all nourishes all too, from a prince to a gypsy. Our sole task in presenting this play was to capture the essence of that love which pulsates at the core of this tale.”  And this is exactly what the cast managed to depict and indeed convey to audiences: the absolute power of love which renders lovers helpless and impervious to their individual circumstances and to their larger surrounding reality.

The sets, props and rendition styles were deliberately arcane and in keeping with the times when rural Bengal thrived on itinerant actors and their “palas” : when large local artiste crews would perform together on stage – the chorus, the narrator, the key protagonists would all double up in many roles, interchange between characters and turn around scenes on stage while performing. The quaint masks on sticks, the painted faces and elaborate feathered headdresses, the crude rattan and bamboo artefacts dotting the stage, all added to that flavour of earthy, bygone evenings when ballads, epics and parables would be performed at village greens and entire communities would sit transfixed experiencing oft-repeated tales most of them knew by heart.

This was the story of the love between Mahua, a Brahmin girl kidnapped by gypsies when she was just 6 months old and brought up as a performing gypsy, and Nader Chand, the Prince of Nadya, whom she captivated while performing for him at his royal residence. Such a union was not possible then and indeed not even possible now in current-day India when Khap panchayats decide the fate of many an innocent and earnest lover (Goutam even made a mention of this cruelty at the end of his play).

What made the lovers’ travails heartrending to me were the haunting voices of Dyuti Ghosh who played Mohua and of Goutam Halder himself: both sang with passion and fervour. Goutam was omnipresent – he was the narrator, interjector, the overwhelming Gypsy Humra- Mohua’s adoptive father; in a way he carried the play on his able shoulders. What was also interesting was his witty repartee and dialogue with the audience which he kept up as he walked up and down the aisles and sometimes even egging the cast to do the same.

The story of Mohua’s and Nader Chand’s love, loss and longing is part of a collection of folk ballads originating in pre-Independence Bengal’s Mymensingha region, now in Bangladesh. These ballads are part of rural Bengal’s rich oral traditions which typically convey deep social messages of morality and ethics. This story however stands out as it is unconventional in its accentuation of a woman’s perspective with a sub-text which comments on caste politics in an idiom both earthy and sincere.

I wish though that Goutam had ended the play with the desolation of the lovers’ death in the final scene; the subsequent music and monologue wasn’t really necessary.

Audiences seemed moved, many of them from Delhi’s “probashi” Bengali diaspora who accosted Goutam later for his views on art and politics, aching perhaps for flavourful addas of another time and in another city.