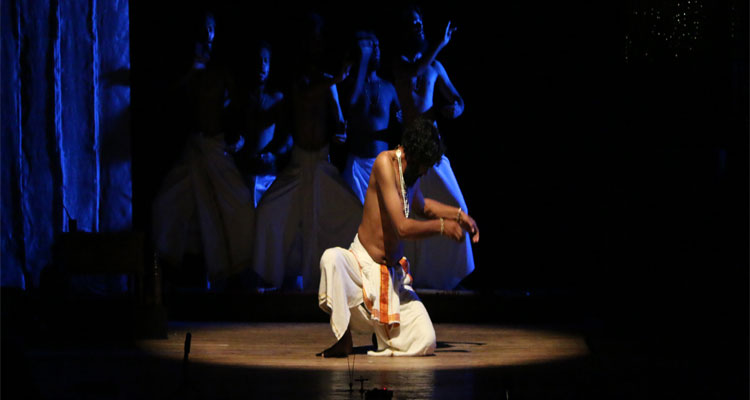 On the last day of the ongoing Meta festival organised by Teamwork Arts, a Rajasthani play, Katha Sukavi Suryamall Ki was staged by Perafin Society..

The play, directed and scripted by Rajendra Panchal in Rajasthani Hatodi dialect, and partially in Hindi and English, was a salutation to the literary and patriotic persona of revolutionary poet Sukavi Suryamall which was essayed to perfection by Panchal himself.

Suryamall is the royal court poet of Boondi .The play opens to chants of om ganeshaya namaha, om saraswataye namaha. A beautiful Rajasthani miniature painting is brought centrestage depicting various scenes.  Suryamall loves Boondi. “Mahaari Boondi re, nakhrari Boondii re, hariyaali kheti re!” He sings beautiful songs on peacocks strutting in gardens and as the king goes out to hunt a deer. The poet composes large volumes of poetry eulogising Raja Vishni.

The play revolves around the Revolution of 1857. The Raja had also signed a Treaty with The East India Company. The British did not want Tatya Tope to enter Boondi. Raja Ram Mohan Singh extends full support to the British. The poet is sad and heartbroken; his heart goes out to the brave freedom fighters. He says he is a worshipper of Saraswati: “Kings cannot lure me with Laxmi, rewards in the form of wealth and estates.”

He weeps bitterly when he learns of the death of Balwant Singh. He takes to drinking and stays in an inebriated state. He writes poetry on liquor in his intoxication: “Daaru toh dhak dhak kare paayal kare pukaar./sovat nindiya jagai rama, din nahin chain/raat nahin chaain, apni kehat hai hammar nahin maane dard jiya ka bedardi na jaane, kahe ko preet lagai….,” his sad face reflects that his end is approaching, His dilemma, internal conflict and his sadness are depicted in words of desperation: “Ku ne sunao re! He is disenchanted and upset with the Raja.

Emperor Bahadur Shah Zafar addresses the Indians to fight against the “zaalim firangis”, the infidel foreigners. He urges Hindus and Muslims to unite in the quest for freedom. The play gives ample glimpses from Suryamall’’s works:Veer Satsai, Balvad Vilaas, and Vansh Bhaskar.

The folk narrative and regional dialect charm as usual and the curtain falls to huge applause!