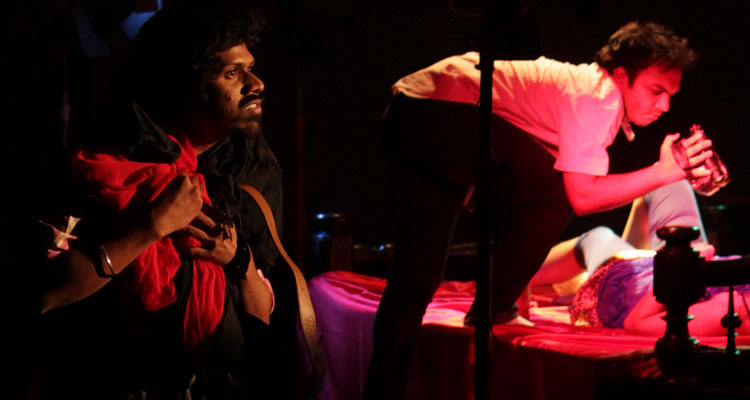 I have always prided myself in being a 90’s Bollywood kid. From trivia and gossip to dialogues and songs, I know it all. But if I were to revaluate that era and my pervasive interests (as I more recently have), there will definitely be some shocking revelations. Kshitish Date’s play ‘Item’ is probably that discursive journey.

Set well before the age of Multiplexes, ‘Item’ is probably the most metaphysical entry on the stage of META because the stage is the stage. Exploring the underbelly of the Bombay film world, the story follows the rise of B-Grade superstar Sapna through the eyes of her personal assistant and former light technician, L. Rakesh.

The play opens with music that immediately transports you to the age of pre-Multiplex Cinema, followed by a scene where Sapna, the main interest of Rakesh is shooting an advertisement for an inner-wear brand. All this sets the tone for narrator-actor L. Rakesh, who begins the performance with a curious name game, asking the audience if they’ve seen any movies ‘Sapna Madam’ has acted in. With a disgruntled laugh, we hide the embarrassment at having to answer these questions. Much of the play continues in a similar vein and the candid humour, especially in using very interesting names is scintillatingly thought provoking.

With on-stage cameras, lights, rollers and other production instruments, the eyes quickly get attracted to the stage design. Much of the play is shown through the lens of a film shoot and the action behind the scenes. Visually, the narrative is dominated by the subaltern and often neglected perspectives of individuals like ‘spot dada’ (helper on the shooting floor), whose voice is represented by L. Rakesh himself.  The actors need to be commended for their excellent portrayal of life-like characters. The attention to detail in terms of body language and voice modulation is superb and the costumes only enhance the characters’ appeal.

The play is a responsible take on women’s struggles in the film industry, through symbols.  While the women’s body is the site of abuse, the objects she is surrounded by are the source of her entrapments. The camera elicits the ‘male gaze’ as it travels to every part of ‘Sapna Ji’s’ body. The industry cunningly uses code words like ‘audience demands’ or `male ko receive karo’ to justify this objectification.

‘Sapna Ji’ rises to become the queen of ‘bed scenes’, a bed which is the site of domination and suppression, where a man’s wishes can run riot. The bed interestingly is not a prop but a character in this play. The bed-sheets kept changing colour, but the function was constant. The director interestingly, is invisible throughout. You can only hear his commanding voice, instructing ‘Sapna Ji’ to ‘romance’ and ‘open up’ disdainfully. It is perhaps ironically fitting that perpetrators of violence, who control power are always hidden. Inhibited at first, the subjugation is routinized by ‘Sapna Ji’. She keeps adjusting to the male demands on and off the screen.

The transition of Sapna from a B- grade dancer to a porn star is fraught with disappearances and comebacks, two failed marriages, plastic surgery and other compromises. This all is revealed to us during the play by L Rakesh, who because of his character’s sensitivity, deft acting and nuanced script is an effective narrator. But the female lead actor playing Sapna is not able to do justice to a character that is bold, yet vulnerable. Sapna’s journey is allegorical for the helplessness and victimisation of women. The scenes where Sapna opens up to her assistant as a confidant fail to reach that emotional pitch.

Despite these minor aberrations, ‘Item’ keeps your interest alive till the end, although the second half of the play seems a little stretched.   The explicit commentary on issues like male-dominance, nudity, film publicity and public conception of ‘B grade’ cinema seems repetitive and a little forced. The play has relied on subtle representation and crass truths to make its point, but the style of messaging at the end only stretches the play without adding much. It is also a little ironic that a male character has to do the bidding of a woman’s life journey in the industry, but that seems like a negotiation in an otherwise male-dominant industry.

The Bollywood referencing through the stage setup is top notch, while the earnest and truthful performances make ‘Item’ a definite watch. The use of a classic stage deception technique to transit between scenes will leave you with unexpected surprises on stage. In the end, the metaphysics of ‘Item’ has a question for us – the movie-watching audience. Whose gaze is more judgemental? Is the camera or our eyes that deem this subjugation?