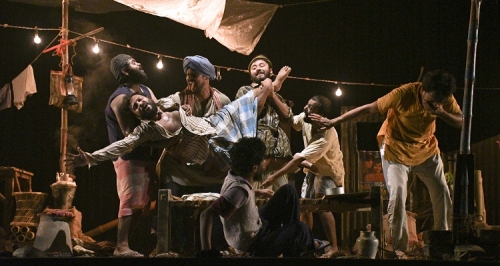 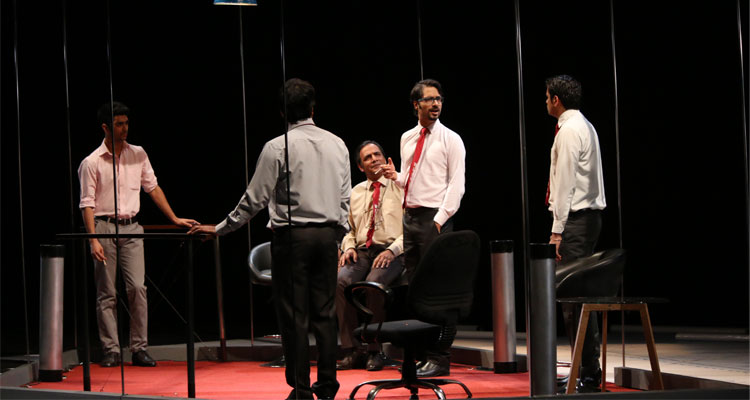 Smoking has been horribly out of favor for sometime as cigarette smokers are pariahs and these once proud smokers that were so ubiquitous in restaurants, bars, and public places can now be seen huddled in little pockets of shame in the rain, outside parks and now in the smoking area or confined smoking room of airports and corporate buildings.

Director Akash Khurana’s comedy Dhumrapan on the fourth successful day of META being held in Delhi is a play filled to the brim with snappy performances, one liners and great dialogue. The pacing is just spot on and there is not one scene wasted in this fantastic play. The aptly set up smoking area ,great work there on the stage set up,  the unspoken camaraderie of the employees as they discuss appraisals, office policies, their personal relationships all the while dealing with their stress, fears and insecurities beautifully portrayed in the characters of Eknath, Kunal and Mitesh are commendable. You are exhilarated and desolate by turn.The changing human ethics as the employees struggle to move up the corporate ladder and retain their jobs is done well. The incredible scene in which Owen, Kunal , and Mitesh talk about what had transpired and speculate on what could have been done in a similar situation, make it a very watchable eighty minutes. The play never loses steam, and is infinitely watchable.

I particularly loved the exchanges between the boss Rastogi and Eknathji which were some of the funniest part of the play. His ticking Eknath off by saying “jo bhi kehna chaahate ho mat kaho”, the battle of complex hindi words anivarya, yak a yak, aksamaat,antargat, kinkaratavyavimood,who is able to out beat the other has the audience in splits. The clapping and laughing of the audience on lines like cell phone means we are prisoners. The unbeatable humor in the new interns query on “how naughty is the night Owen’ and his retort yes i will be fixing my mother in laws laptop tonight and scores of others keep you well entertained. Dar ke aage mountain dew hai,or the twist in the play when a pretty girl comes to the smoking area…marketing mein woh aayi aur sale hamaari ho gayi. Chat pe chale jaana Id ki taariq badal jaayegi. Owens comment on how he would get W tattooed on both his butt cheeks and people would say WOW! Chaos is let loose at his advise of “go with the flow “to his colleague.

Towards the end of the show  Eknath’s visit to the office and his comment on” kitne khush ho jaate hain hum apni  choti choti bagawat se “when he goes and gets a hazel nut cappuccino is fun.The relationship between Rastogi the boss, the generation gap between the father and son the “family ke naam pe dhabba”all sound familiar.

The play ends on a happy note with Owens comment your account has been credited! Finally all is well in Eknath’s world.The subtle background music of the guitarist spices it all up.