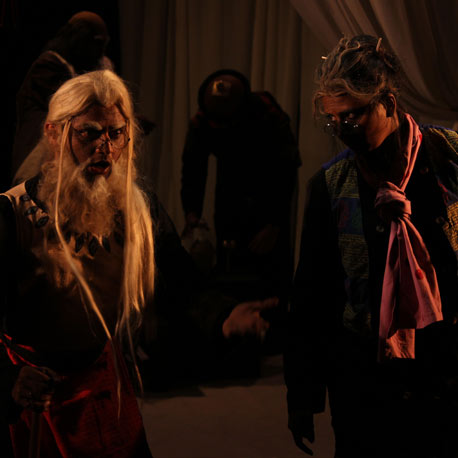 A rendition of Bertolt Brecht’s regularly performed German play, Caucasian Chalk Circle explores a plethora of human emotions and behaviour. With a focus on maternal bonds, the narrative takes the audience on a journey of love, struggle, greed, and justice.

Natella, played by Vidya V in this Theatre Artistree production, while over-indulging her son Michael, the apple of her and her husband Georgi Abashwili’s eyes, is also jealous of the attention Michael gets from her husband. They shower the infant with material riches and fret over every little thing the child does.

Grusha, played by Shwetha Srinivas, is a hardworking palace maid, who promises herself to the palace guard Simon. However, when riots break out in the city, Simon is sent away to war. Grusha promises him that she will wait for him till he returns and get married to him.

Meanwhile, Natella leaves her baby behind without a second thought while fleeing from the palace and Grusha, who is rather young for the intense maternal feelings that she conveys, rescues Michael, and tries to find him a home so that she can wait for her beloved Simon to come back from the war.

As it often happens to people who go through the struggles of an ordeal together, Grusha becomes very attached to Michael and develops for him the deepest sense of protection and love. She goes through many tribulations and yet raises Michael to be a happy child who can fend for himself.

When Natella comes back after years to claim Michael as her son, so that she can regain access to her husband’s palace and riches, which are tied to the child, Grusha goes through perhaps the toughest trial of her life till then when she must fight in court for her dear Michael. The character of the people’s “judge”, who bestows justice with a no-nonsense approach and wry humour, is fleshed out cleverly. He brings just desserts and a swift resolution by making the two women go through a test of the “chalk circle” to find the “real” mother among them, one whose love is both tough and unfailing.

The tale of a mother, who is not related to her child by blood, and yet is more an ideal parent to him than the woman who gave him birth, is performed with feeling on stage under Chandra Keerthi B’s direction. The power of strong “female” energies that are portrayed through the various characters are clear and palpable. Be it Grusha, Natella or Jussup’s mother or Grusha’s sister-in-law or her mother-in-law, there is display of skilled acting acumen in depicting behavioural traits which are brought forth on stage.

The play uses music as an effective part of its narrative. Songs are used at regular intervals to tell the story as well as to highlight feelings and thoughts. While this adds a very ‘Sound of Music’ effect to Caucasian Chalk Circle, it also helps the audience understand the characters in elaborate depth.

The play engages with the audience in a simple yet potent way through eye-catching stage design, harmonious music, and earnestness in acting.