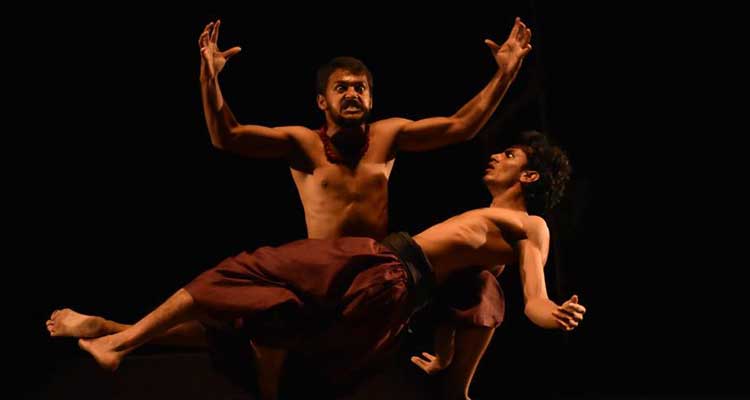 Andha Yug: The Agony of Right and Wrong

Even after centuries have passed, a million retellings done and a thousand perspectives discussed, the Mahabharata doesn’t fail to tantalise or raise serious existential questions on morality, ethics and the futility of violence.

Last night’s play at the 14th Mahindra Excellence in Theatre Awards (META) festival, Andha Yug, directed by Joy Maisnam and produced by TAAM (Manipur), had me riveted by its powerful standpoint on the Kurukshetra war, its spectacular choreography and striking drum-beats of war. A visual treat aside, which it was – all bare-bodied, rippling warrior muscles, brilliantly stage-lit, it raised very relevant questions on the eternal riddle of good vs evil and who exactly was “right” in the Kurukshetra war.

The play revolves around the bloody finale of the 18-day epic battle which is largely seen through the unspeakable grief of the Kaurava matriarch Gandhari, and her inability to understand the divine justice in losing all of her 100 sons in its senseless violence. Gandhari questions in the very beginning – who exactly is on the side of “Dharma”? And this I have often wondered too – weren’t they all fighting for the “adharm” of self-aggrandisement? Isn’t every war ultimately just that?

In Gandhari’s howl of grief, lies her distrust too of the unquestioning reverence meted to Krishna - she is aware of his schemes and machinations in helping the Pandavas win – from telling Yudhishtir to be evasive about the killing of Ashwatthama the elephant, and thereby mislead the mighty Dronacharya to believe it was his son Ashwatthama who is dead and thus allow Dhrishtadumna, the Pandava army chief, to swiftly behead Drona, to the most grievous deception of all – when Krishna pointed at his own thigh to Bheema to signal that Bheema should hit Duryodhan on the thigh – the only susceptible part of the latter’s body (which had not been blessed by his mother’s divine sight) which led to the fatal blow that felled Duryodhan.

The scene shifts to the battlefield where the hapless Ashwatthama watches his mentor Duryodhan lie in immobile agony, his thighs smashed by Bheema’s blow – he will soon die but not before he anoints Ashwatthama as the new senapati and avenge the Kauravas’ fate. Ashwatthama, another of the play’s key protagonists, goes on a rampage that night, killing many from the opposing side in the quiet of the night, strictly unethical by the laws of war, and then decides to release the “Brahmastra” at the same time as Arjuna does so. And once again you worry about the rightness or wrongness of it all.

As soon as the deadly weapon is released, we hear a disembodied voice, presumably of Vyasa, warning of the utter destruction this weapon would bring making the earth and all its people barren and lifeless. In my mind, I saw the chilling prophecy of modern nuclear warfare and thought of the aftermath of Hiroshima’s Brahmastra.

Ashwatthama refuses to take the weapon back (We know from our knowledge of the epic that Arjuna had taken his Brahmastra back as he had been instructed how to by Krishna his charioteer; we also know that Ashwatthma, in his inability to call the weapon back and in his desire to wipe out the Pandava dynasty, had directed his towards the womb of Uttara which was nurturing Arjuna’s grandchild, the dead Abhimanyu’s child.) and is cursed by Krishna to be doomed to roam the forests of the earth forever, wounded and suffering, and unable to be freed from his predicament by the gift of death.

The final scene is palpable in the heightened tension of Gandhari’s sorrow as she confronts the dead Duryodhan’s corpse and invokes the powers of a mother’s strength to curse Krishna – she sends his entire race to the grim fate of being perished by famine and him to die an animal’s death, pierced by a hunter’s arrow. We see Krishna in the background accepting his curse and his fate with stoic and calm acceptance; we hear Gandhari’s lament at what she had done; we understand the ineluctability of destiny as we see a hunter walk onto the stage and take aim just before the auditorium is plunged into complete darkness.

Last night’s play made us think. It made us agonise over Gandhari’s choice to be “andha”, unseeing of the cruelty of the real world. And be moved. It also made me realise that the truths and tales of the Mahabharata, whether we have actually read its many translations or devoured its numerous Amar Chitra Katha stories or followed the technicolour visuals of the tacky but iconic 90s TV soap, are indelible parts of India’s collective subconscious, bound to plague us at some point in our adult lives! Yes, the play assumed some amount of foreknowledge of the epic on the part of the audience, but that was easy – over five thousand years of oral history came bubbling up to our minds’ surface…