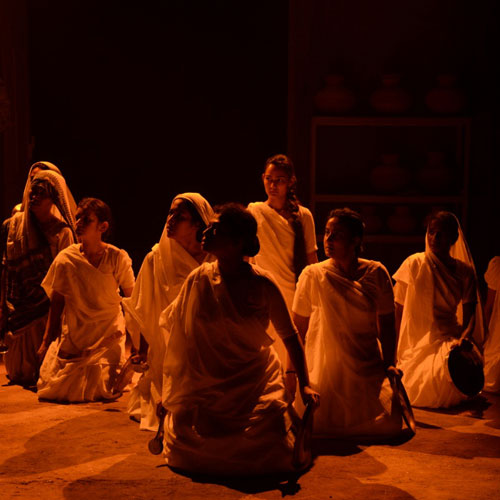 Only after the play is over that you realize the emotional journey you went through, and the intensity of subject it managed to portray. The play starts with a group of women singing, dancing and they immediately transport you to their world. You are part of their banter, laughing along and are so involved, that the gunshots come as a jolt as much to those women as you. This powerful beginning sets the stage for a compelling narrative on patriarchy, caste, class, conflict and politics.

Directed by Swati Dubey and written by Ashish Pathak, Agarbatti brings to life the aftermath of the Behmai massacre committed by Bandit Queen Phoolan Devi and her gang to avenge her gang rape by the upper-caste Thakur men of Behmai.

What follows is a narrative set in the agarbatti factory that takes us through the journey of each of these women and their struggle in coming to terms with their new reality. Their anger and grief are so palpable that they get under your skin. Each actor inhabits the character completely and makes an impression on the audience. Only this conviction on part of the actors could have managed to pull off the nuances and layers of the play.

In a world where the boundaries of caste, class and gender are so rigid and patriarchy so overpowering, how do these women find the strength and courage to face their reality, and see their husbands for who they really were? One of the women starts questioning the deeds of their men, and this evokes strong reactions in each of the characters in the story. The script manages to strike a balance between the complexity and simplicity of the journey that each of these women goes through - from loss, rage, and defiance to courage, acceptance and empowerment.

For me this is a story of female-bonding and collective strength. The journey towards empowerment is never easy and the play showcases that struggle really well. Sometimes the toughest battles we fight are with ourselves, and this struggle makes the characters truly inspiring.

The set design is minimal and efficient. Sound and light design complement the narrative perfectly well. Sometimes the play slows down to a point that it almost seems a drag, but at no point do the characters fail to hold the attention of the audience. Use of the stage is done beautifully and thoughtfully.

The play effortlessly manages to connect the audience to the stories and emotions of its characters and lets us see the world through their perspective. For me, this has been one of the strongest plays I have experienced at the Mahindra Excellence in Theatre Awards.