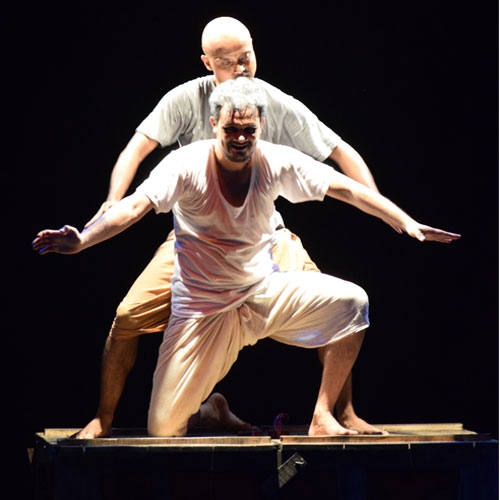 The play opens with the audience meeting the protagonist Vodai, who has gone 84 days without catching a fish, and considered to embody the worst form of misfortune. Even his young apprentice Rongmon is advised to stay away from him. But Rongmon visits Vodai every evening with food and tales of his past.

The scene shifts to the next day when Vodai ventures into the river again and puts up a brave fight with a big fish that takes his bait. When Vodai brings the fish home, it is devoured by crabs and shrimps on the way. Vodai falls into a deep sleep and when he wakes up the following morning, he promises Rongmon, in a surge of hope, that they will fish together once again.

The Old Man is a dramatic adaptation of Ernest Hemingway’s classic The Old Man and the Sea in Assamese. The mighty Brahmaputra with its tributaries flows through Assam, a state in the North-East of India. It is the lifeline of the people of this valley. The river is witness to the several ups and downs in the lives of the people living around it. These are people who earn their livelihood and are dependent on the river directly or indirectly, either as fishermen, boatmen or as daily wage laborers. The play conveys how human beings have destroyed nature for their greed and nature has begun to show its anger in retaliation in the form of disasters. The region around the Brahmaputra faces frequent floods and the conflict between human society and nature goes on year after year.

The play also deals with loneliness, a complex and unpleasant emotional response to isolation. Loneliness typically includes anxious feelings about a lack of connection and communication with others, both in the present moment and extending into the future. As people grow old, loneliness begins to manifest itself in their lives in different forms and at some point, the feeling becomes synonymous with one’s existence. However, even as a situation seems hopeless, life gifts us the will power and grit to push ourselves mentally towards a stronger, more positive and optimistic world view.

Sahidul Haque is an actor, director, designer, and painter from Nagaon in Assam. He was an active practitioner of folk theatre till college, after which his love for theatre led him to HCRFTA, Himachal Pradesh, where he trained. He joined the NSD TIE Co. as an actor-teacher for 7 years. During his tenure, he conducted various workshops for children, adults and teachers, devised plays and also performed in them. He has directed more than 35 plays in Hindi, English, Assamese, apart from ones which are non-verbal, and in dialects such as Tiwa and Rabha. He has been part of many theatre festivals such as Bharat Rang Mahotsav, Poorvottar Natya Samaroh, Natasurjya Theatre Festival. He has also done set design for many productions and has worked under several national and international prominent theatre personalities.