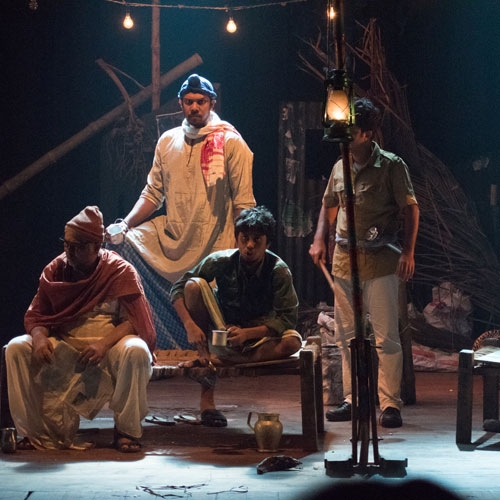 Ghoom Nei revolves around workers from the lowest segment of society with abysmal standards of living, struggling under dictatorship. That these are the people most impacted by gains and losses in a society is the central focus of the play. The play contains several parallel stories - the story of truck drivers and their existential crisis; the story of a dhaba and its owner; the story of an unemployed individual and his struggle to enter the mainstream; the story of an insane person and his sense of loneliness; the story of a senior individual to whom these other stories have no meaning; the story of two reporters and their constant search for a new story. A manifesto of the lowest working segment of society, the plot travels through a dark broken highway, attempting to reach the bridge of light, illuminated by hope and camaraderie.

This plot from the 70s seemed very relevant today. It is a play of the uncivilized. A bourgeois boss is greeted with a “Good Morning” whereas truck drivers do not even think twice before berating their boss in filthy language to get their justified wages. Ghoom Nei teaches us to think anew and to raise the red flag of the proletariat. The audience will return with a strongly tied fist at the end.

Starting at the age of 16, Saurav Palodhi is a full time theatre practitioner, film director, theatre director, actor and scriptwriter for theatre and films. He has directed many theatre productions of which, Nataktar Naam Ki? was performed at NSD’s Bharat Rang Mahotsav 2016 and Theatre Olympics 2018.