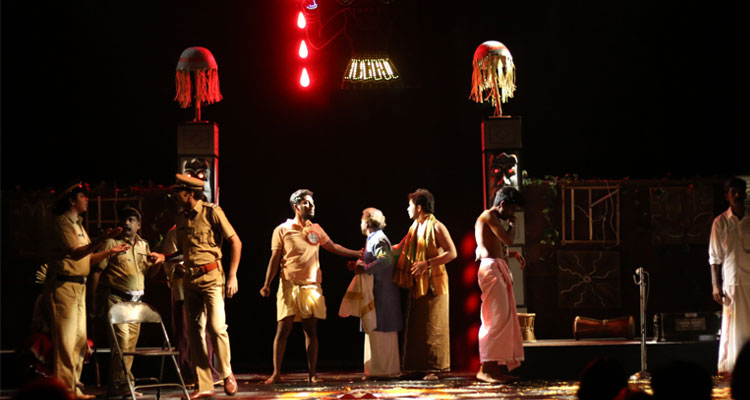 Much has been said about woman empowerment. Much has been done. There are literacy programmes running all over the world, celebrities and philanthropists are doing their bit to help women stand on their feet and thanks to social media, women from all walks of life are realizing all that is being done for them.

Sajitha Madathil had these exact questions in mind when she wrote the Malayalam Drama Kaali Naadakam. The drama is among 10 other plays that have been nominated for the META Awards (Mahindra Excellence in Theatre Awards). The play is directed by National Award-winning director Chandradasan and produced by the Lokadharmi Group.

Kaali Naadakam is a well-known temple ritual in Kerala where characters dress up as Goddess Bhadrakali and Demon Darika. Bhadrakali after rigorous combat slays the evil Darika, an oppressor and notorious demon. It has been observed occasionally that the characters playing the role of Bhadrakali often go into a trance and actually slay the real life person portraying Daarika.

The story, written on the same lines, unfolds against the backdrop of a remote village in Kerala where fifty-one years ago, the actor playing Kaali killed the actor playing Daarika. After this, the play was stopped and was recently reinstated after half a century. The role of Bhadrakaali has now been given to a low caste Dalit girl Kaali while Daarika is played by Rama Kurup, one of the village landlords.

History repeats itself as Rama Kurup, the landlord is killed by Kaali inside the temple. The pious temple ground is now a crime scene. The media, which was covering festivities a while ago, is now brimming with adrenaline-filled frenzy over the recent turn of events. The devotees believe that it is wrong to question the doings of the devi while the police, atheists and human welfare associations create a hullabaloo over the wrongful killing of a “cruel -looking but gentle at heart man”.

As the story unfolds, it is revealed that Rama Kurup in reality had wronged women in his time and his ultimate sacrifice is befitting to the role that Kaali played.

The play, with its magnificent narrative, excellent acting and ritualistic theatrics dovetails into a brilliant traditional performance diving into contemporary problems. Women are epitomized as pictures of grace and elegance and their wild sides are suppressed. “Do not be like Kaali, do not show your aggression, or the world will not perceive you as a good person. This is what we are taught. This is who we are supposed to be. Our society’s perception of women who are righteous lies in calm, serene and quiet figures. It’s about time we change this notion. It is time for us to take a stand against oppression against us,” says Sanjitha.  The play raises all the right questions. Even though empowered, women in reality are still subjugated in the society. Are they really empowered as propagated?

The play has been nominated in several categories including Best Actor in a Lead Role, Best Innovative Sound and Best Direction. Catch the play and the winners between 4th – 10th March, 2017 at Shri Ram Centre, LTG and Kamani Auditorium, New Delhi.