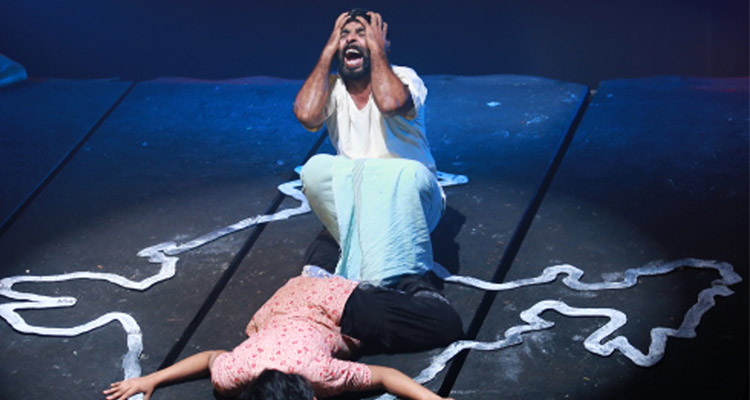 Nona – An Interplay in Modern-Day Allegory and Stagecraft

The first scene of Nona shook me out of my usual week-day evening reverie – it was a dramatic and shocking beginning – a darkened spot-lit stage created out of a sloping platform. A group of chiselled male bodies draped in mundus, armed with sticks, faces contorted in menacing violence, raining blows on an unarmed and deranged-looking man in their midst: the background score rising in crescendo even as war-cries of the beating horde became amplified.

I sat up, glued to my seat, waiting for the drama to unfold. I was fascinated by the props, the spell cast by the lights: the entire stage was made of wooden panels forming a sloping platform with the dexterity to move in different directions carrying a cast of almost 25 actors. The stage would move up and down with the actors signifying entries and exits and sometimes under the crevice of the panels, a new scene and scenography would emerge. What perfect synchronisation there was between the tech teams, the set designer and the lighting people – this is what makes the stage a world of unbridled possibility.

The play, directed by celebrated Malayalam director, Jino Joseph, whose previous The Wave had bagged many awards at META 2015, was rich in allegory, symbolism and metaphor. As the Director’s Note says, “Symbols of nationalism are vital to our national identity, but genuine patriotism transcends these symbols” and the play demonstrates this through the social fabric of a small southern hamlet which is first torn asunder by the machinations of the urbane Prasanthan in connivance with an unnamed magician and the village strongman Pothen only to come together at the end to drive out the evil from their tightly-knit village ecosystem.

Prasanthan, son of a simple and hard-working villager Govindan, comes to this idyllic rural setting where communities across religions and castes co-exist in harmony and sows the seeds of violence by drawing the map of India on his courtyard and then forbidding anyone to tarnish it by coming near it. The symbolism isn’t lost on the audience – Prasanthan waltzes around the countryside and expects that no harm will come to his “India” while being on a remote-control mode of caring for it. He treats his former friends and neighbours as infiltrators humiliating them in flagrant casteist overtones. In fact, at one point the symbolism to me seemed akin to the global immigrant crisis we are dealing with the world over – in trying to keep our own interior pristine, we drive out those who seek shelter and security.

The deeper metaphor is in the figure of the magician who comes in to collude with Prasanthan to create a world of illusion or lies (the literal meaning of the Malayalam word nona is lie!) for the innocent villagers and make them speak “on camera” a misleading language of “robust well-being” for an advertisement film which Prasanthan seems to have been commissioned for by the shadowy figure of “the government”. There is heavy-handed irony when Prasanthan, holding his fancy hand-held camera, coaxes his father’s old friend, the elderly Narayanan (whose daughter Ashwathy begins the play as his love interest) to repeat after him how satisfying the government’s agriculture welfare schemes have been. And Narayanan, in failing to do so, becomes an object of derision and contempt for Prasanthan and his smug band of brothers.

What caught me by surprise was the violence which built up gradually in the rural hamlet set on an unconventional stage-setting: Prasanthan weaves illusion after learning at the knee of his magician-mentor and we see the chilling scenes of first his father in a stupor of shock holding a length of rope and then a pair of legs dangling in the background. Ashwathy lies sprawled and dead on the map of India while her father proclaims with impassioned histrionics that he had seen her as a woman first and not as a daughter. Little girls in uniform appear soon after reminding us of the bestial acts of rape which have sent shockwaves currently across the country.

My problem with the play however lies herein – the sub-plot and sub-text of the violence within are left ambiguous. One isn’t sure if Narayanan was speaking the truth or was confessing to such heinous crimes at the insistence of the illusionist Prasanthan who sits in the background brandishing a script. Did Govindan commit suicide as directed by his son who had morphed into a master-designer of evil, misshapen reality?

We come away both troubled and reassured  – the village does manage to rise above the manipulated riots which have divided its core at the insistence of Rohini, Prasanthan’s mother, who finally sees her son for what he is; and yet the footprints of violence on the sloping platform remain.

The interplay between imagination and reality is done with consummate ease through musical sequences employing dancers in slow-motion techniques typically used in Indian cinema. The actors are intense and convincing; I may have been more satisfied had they had greater delineation but with a cast as diverse and large as this, too much fleshing out may come in the way.

What mattered most to me was that important questions on the politics and divisiveness of our times were raised through wit, brutal honesty and a lot of humour. Audiences felt challenged and I would hope, went home jostling their minds for answers.