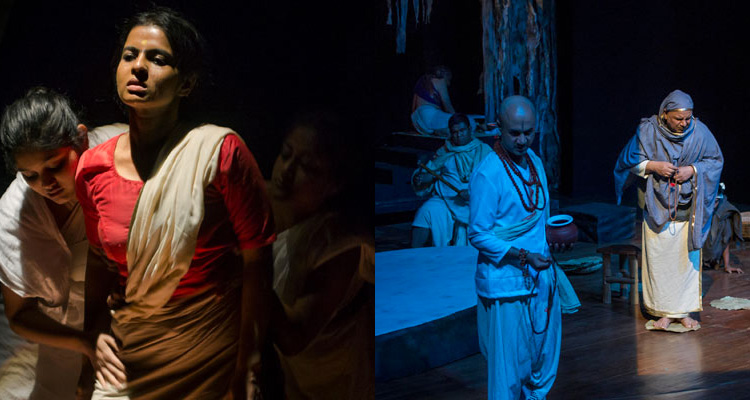 Setting the stage for the 13th Mahindra Excellence in Theatre Awards was Abhishek Majumdar’s directorial venture: Muktidham. If the name is anything to go by, it only tells us that we have a long road before salvation. A gripping drama set in the curious 8th-century town of Birpur, Muktidham leaves us with some uncomfortable questions to answer.

The plot is rather simple and intriguing. This play is set in a matha (Hindu monastery) at a time when the Buddhist Pala kings were the dominant rulers of Northern and Eastern India and mass conversions to Buddhism were widespread.
At the beginning of the play, we are made aware that there will be a change of guard at the local matha (temple) as the ‘Mahant’ (head priest) looks to hand over his powers to one of his disciples before he can attain ‘Moksha’ (salvation). The quest for priestly divinity has different meanings for the two contenders with divergent ideologies: Acharya Yuyutsu and Acharya Agnivesha. Both of them come with a set of ambitions that could change the course of lives for Sanatan Dharmis. However, the plot quickly takes a dark turn when one of these ambitions reaches diabolical levels. The death of a Buddhist Artist sparks a conflict that has been simmering for a few years now in Birpur. There are those who demand justice and are willing to go to any length to find the guilty.

The highlight of the story is the gripping narrative with its rather interesting twists and turns. Religious fault lines have been tread very carefully through this production. The debates on religious conversions today are as relevant as the ones setting the context in the production. There is a resonance with Ambedkarite politics and the exclusion faced by downtrodden communities. The interwoven commentaries on the idea of God-religion, justice-politics, makes you wonder about the mistakes we as a human race continue to commit. The young seek change but are inhibited by the overwhelming presence of age-old social structures.

There is a definite and looming sub-theme in this production – that of man‘s struggle. As an audience, you relate to several characters on stage only because of the turmoil they go through. The personal is as important as the larger socio-political setup, if not more. Those who seek power are facing their own set of conflicts as much as those who are deliberately kept away from it. The play cleverly allows for periods of silence that helps you in the audience to triangulate your viewpoint.

Lucid stage and light setup embellish the narrative. One of the most interesting imageries in this regard is that of the hill where the matha is located. The actor’s line of sight upward or downward indicates the place of the character in the social hierarchy. The head priest occupies a permanent elevated spot upstage, the rest of the story is performed within a minimal space, demarcated by well-defined light design. The veracity of the lights come to fore with a magical portrayal of the solar eclipse, that holds a symbolic importance in the second half of the play.

A judicious stage use has also allowed an equality of narrative. The priestly debates of the ‘Great Tradition’ have been carefully contrasted with the ‘Local Traditions’ and folklore of the downtrodden. Visually, you can traverse through multiple power relationships present in the 8th-century town of Birpur. ‘Ram’ finds an audacious presence in the performance. The chants have been effectively used to effectively create the mood in the scene. Even if you’re stripped off all statuses, identity and respect, ‘Ram’ is the most difficult sense to forgo. It can be used for any purpose or benefit, even if it means committing cold-blooded murder.

Amidst this contest of worldviews and personal struggles, who will ultimately find power? More importantly, can a broken system produce a good leader? Theatre has always found unique methods to provide social commentaries. When times are such where voices are suppressed unequivocally, Muktidham is a transcendental experience. A set of responsible actors retelling a timeless and cyclic tale, Muktidham does not lend itself to an easy closure.

All characters in this play are seeking salvation from their personal, difficult self. But truly, is the escape that we seek possible or even worth it?