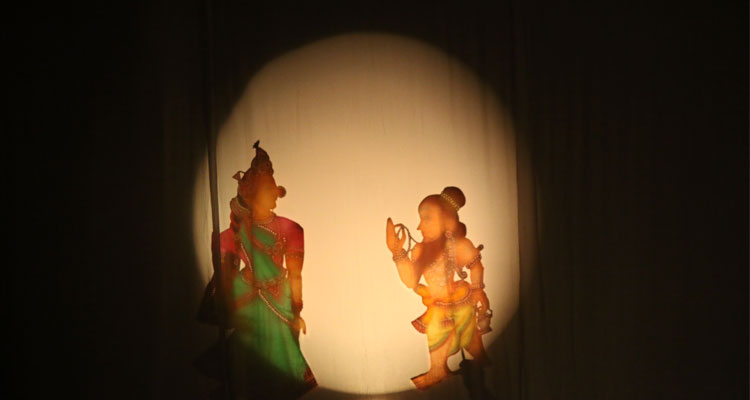 and literature. It has been adapted for the stage from Nukkad Ram Lila to Peter Brook’s celebrated and seminal interpretation of the Mahabharata. It is not a surprise that at the 12th META Festival, four plays have basis in mythology and two revolve around the Mahabharata.

Puppeteer Anurupa Roy’s Mahabharata is a co-production of her Delhi-based collective Kat Katha and Festival Mondial des Marionettes Charleville Mezeires. This performance with life-size puppets, masks and shadow puppets looks at the Mahabharata as a dynamic narrative, which has evolved over the last few centuries through the sung verses of Togalu Gombeyatta’s Sillakeyata Mahabharata and remains relevant in the new search of contemporary puppeteers.

Anurupa’s Mahabharata explores the inner dilemmas of 15 characters through a stream of narratives of their past and present motives. It wonders if each character’s single-minded and unquestioning loyalty to one’s belief system lead to the inevitable conflict… Was there ever a moment when each of these characters could have averted war by choosing differently? Or is one doomed to make the same choices eternally?”

This, well, is the central dilemma of the Mahabharata and has been dealt with or written about earlier, but never have I witnessed the Mahabharta being dealt with such an eclectic breadth. The play uses traditional shadow puppetry, multi-media puppetry, human-size puppets, masks and materials like thermocol and plastic with an amazing pace and in a seamless narrative.

The multi- media puppetry has been very ably backed by good lighting, audio-visuals, mixed music – from Yakshagana to Kathak and digeridoo to morsing,  excellent choreography and great writing.  The coordination amongst the actors as they moved the life size puppets with the purpose of making them part of the scene is flawless, the Chariot scene involving Karna especially stood out. The actors in their movements were outstanding, but it was the narration of the two clowns and the haunting voice of the female narrator in the background that ensured that my interest did not waver even for a minute. The use of Hinglish, peppy accent and some cheeky references to the current political scenario by the clowns gave the play a very contemporary feel. As the director Anurupa Roy mentioned in the discussion after the play: “The narrative, as such, becomes an over-arching metaphor for many political, institutional and social situations in the world today.”

For each character in the production, there is a different mask or a puppet representing a certain aspect of the character. “For example, Yuddhistra’s character has an additional head and arms attached to him, which seem to be ruling and manipulating his actions in the gambling scene”, explained Mohmmed Shamin the costume designer and puppet maker of the play, adding that the audience is open to interpret the characters as it deems fit.  The characterisation portrayed the characters in shades of grey and not in black and white.

The narrative is around six to seven important incidents in the Mahabharata such as the Draupudi’s Cheeerharan or Arjun’s Chakrayuh. These sub- plots immediately spring up in a mind when one thinks of the Mahabharata, but did you ever sense Gandhari’s pain on losing her hundred sons. Her sorrow and anger, leading her to curse Krishna adds another feminine perspective to this otherwise very misogynist all-time Indian bestseller.

This Mahabharata broadens creative boundaries and reboots the magic of theatre.  Thank you META, for instilling new energy in an old art form.