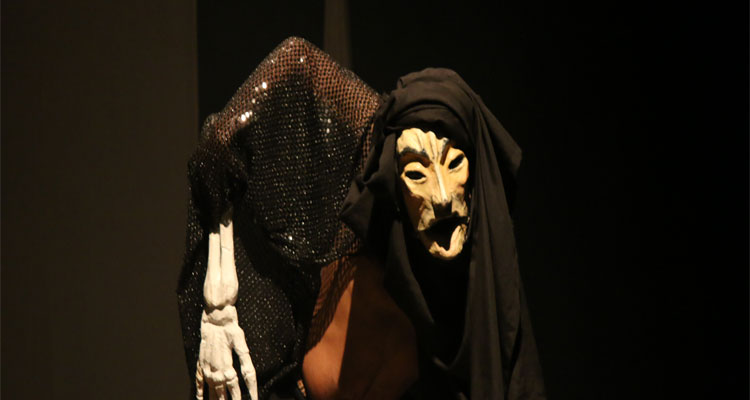 They were moving to the beat of the music and lip syncing the song. No they were not dancers but shadow puppeteers at play. Shadow puppetry is an ancient art form of story telling and entertainment which uses flat articulated cut out fingers which are held between a source of light and a translucent screen.

The show was Mahabharata seventh in the row of the META being held in Delhi by versatile Director Anurupa Roy. She brought the amazing theatre of the  inanimate to us. It is a mixed bag performance with full body puppets, masks, illusions which are extensions of actors bodies and sung verses of Togala Gombaeyatta’s Mahabharata. The oral narrative pauses to engage audiences with its comic and witty comments like ek ke saath ek free how Nakul and Sahadeva were born, how Kauravas came out of 101 earthen pots filled with ghee and how Amba, Ambika, Ambalika, could have found a match from shaadi.com . They ask the audience what they think of the characters predicament.

I am so appalled at how little we know about our own puppetry tradition. The advent of the television and Ipads has usurped a majority of the audience from this act. But it was a pleasure to see a packed hall brimming with old and young relishing the show, portrayed differently from the familiar traditional  dance dramas.

Stunning life like depictions of various episodes of the Mahabharata the Draupadi cheer haran, the chakravuya where Abhimanyu is trapped, the fierce battle of Mahabharata through maps, sound, lights, trotting horses,the killing of Karan by deceit, Shikhandi and Bheem story and in the grand finale the tragic scary tale of Gandhari led the audience to give a thundering applause. On a serious and contemplative note the audience is left to muse over the fact that war is futile and fatal . The vivid depiction of a shattered Gandhari a mother totally distraught cursing Krishna for not averting her tragedy is spell binding. Could destruction and sadness have been averted if revenge and anger was controlled. What choices could each character have altered? Are we doomed or can we survive by guarded behavior.The play increasingly relevant in the polarized conflict ridden world of today.

The play ends with the mesmerising sounds of yada yada hi dharamasya glanir bhavati bharata….and sound of the conch shell, leaving a deep resonating emotion in one and all !