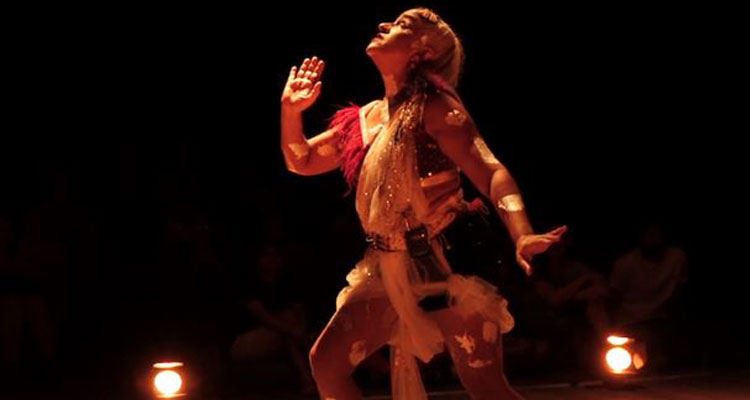 Great theatre is about challenging how we think and encouraging us to fantasize about a world we aspire to. —William Defoe

As we walked out of the Shri Ram Centre for Performing Arts, New Delhi, last night, after the opening of the 14th Mahindra Excellence in Theatre awards, a well-known theatre personality was overheard saying, ‘She’ll get on stage, improvise and say a bit, mutter a bit and we’ll be riveted!’  Maya Rao has that ability to claim the audience and ‘climb the night’ and her play Loose Woman did just that last night.

She performs solo with minimal props, stage-play or sets, using her body to speak even when at times, her words were just guttural sounds emanating from deep within. Making use of some fabulous onstage live music by Sumant Balakrishnan and Sudhir Rikhari and discreetly-used live video feeds on improvised screens, Maya suggested pertinent scenarios, bound to make viewers uncomfortable and maybe smile embarrassedly, about spaces women find themselves in, how they can loosen up and think of issues that leave invisible marks of identification on their bodies.

Loose Woman, while punning on the words of its title, is an episodic, somewhat satirical commentary, pushing the envelope on the dialogue around women-empowerment.

It’s a free-spirited performance; nothing is predictable, as the robust 65-year-old Maya holds the stage for an hour, playing the audience to show the directions the ordinariness of a woman’s life can take.

She conveys all this with élan. What is mesmerising is that one senses that her body feels the words she speaks - whether it’s the video lines wrapping around her like shackles as she stands in front of a clothes-line or the adept moving of her feet, under the devised 3’ x3’ screen, she holds up, capturing the very movements via live camera feeds. Each movement and monologue give a sense of a woman drawing lines around herself or side-stepping issues and inversely suggesting that a full garden can only be planted by a ‘loose woman’.

At times you feel little bits of her emotions shedding as silver sprinkles of paper-thin warq shed directly from her body embellishments as she quivers, quakes and shakes in anger, indulgence or in the historical pain of her gender.

The only obvious if poignant, political statement is in the last episode called ‘Dandi’. The pain of the Mahatma’s vision: walking from Godhra, Naroda Patiya, New York, London, Dadri, Kathu to the suggestively evocative horses grazing in Kashmir as some little Asifa wanders there - leaves one gasping.

The play is intense and as Maya Rao had said in earlier interviews -  ‘I make theatre, it’s a legitimate way to vent anger on stage. It’s about how to make art speak’, she does this with no apology and when this dynamo of a woman lets lose she enthralls.