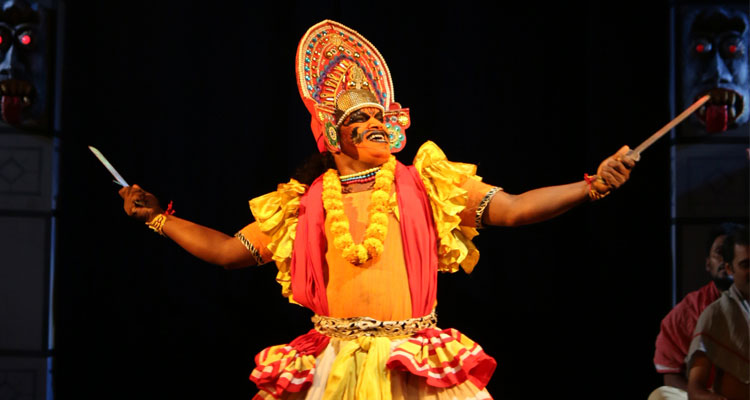 The curtain was rising, the stage was busy with last touches being added to the colorful rangoli depicting Kali.  Darika the demon makes his entrance amidst sound of applause from the audience and beautiful music rendered by an array of musicians and singers churning out songs and prayers glorifying the all powerful amma, the fierce goddess of Shakti, Kaali. A traditional temple play Kaali Naadakam was stopped as the actor playing Kali was played by a Dalit woman a victim of much injustice who kills the actor Darika, like the goddess kills the demon and restores justice.

The outstanding appeal of the colourful costumes of Kali, Darikan and Kooli, vibrant colours in hues of red orange yellow and blue, the magnificent head gear, the over the top make up make for riveting scenes. The play straddles the ritualistic world of folk theatre Mudiyettu  and the realistic theatre to weave together a narrative with stark grim realities. Acrobatics in the dance moves of Darika the graceful yet fierce expressions of Kali the thundering sounds of the battle the temple set up with statues of intimidating demons won over the hearts of the spellbound Delhi audience.

The comic hypocrisy of the temple authorities trying to make a fast buck by giving an opportunity to the faithful devotees to get a one to one opportunity of darshan of the goddess sounded familiar. The tussle between the singers and the organisers over money promised and their threat to ditch the show and exit last minute adds humor to the show. The media is interested in covering a sensational story and are unstoppable. For the police the killing of the actor playing Darika by the actress in the role of  Kali is just a crime to be investigated. The story line was engaging.

It was a visual feast to see the amazing dance performance of Zumesh Chittooran as Darikan and Sajitha Madathli as Kali. The play ends with a temple being made at the spot where the murder happens unmasking the opportunists who never leave an chance to exploit blind faith.

The outstanding musical was brilliant and the audience matched it in their response.