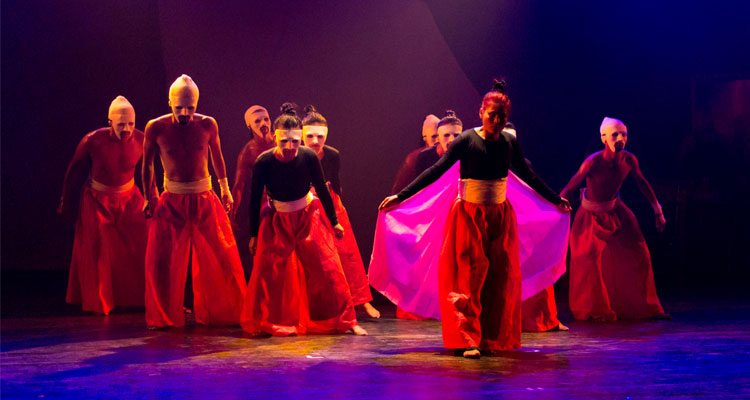 Within the first few minutes of Hojang Taret, you will understand that you are in the presence of something special.

Directed by Oasis Sougaijam and produced by The Umbilical Theatre, this play travelling all the way from Imphal, Manipur, brings to life the Greek tragedy that led to the destruction of the city of Thebes. It is based on Phoenician Women, a tragedy written by Euripides between 411 and 409 BC, in the aftermath of a major defeat of his homeland, Athens.

There is a scene in the play where Eteocles has refused to yield the throne to Polynices, who after marrying the daughter of Adrastus, king of Argos, has raised a host from seven city-states and is already at the gates of Thebes to win his rightful place by force of arms. Jacosta, the mother, has arranged for a cease-fire so that she can mediate between her own sons. For me this was one of the most powerful scenes where Jacosta’s grief is heartbreaking, Polynices’ anger is compelling, and Eteocles’ ambition is convincing.

Jacosta’s grief is so palpable that it gets under your skin. Every actor on stage makes an impression. The lead actors inhabit the characters completely.  Even though I could not understand the language, the tonality clearly communicated the emotions on stage. The actors managed to hold the energy of the play and attention of the audience till the end.

What gives this story power is that the conflict is character-driven. It isn’t the generic battle between good and evil, but it’s a battle of ideologies wherein horrors of war are central, and the play is permeated by the ethical ambiguities of fraternal conflict.

Music is an integral part of the play, where actors perform to an incredible live music. At no point does music overpower the audience’s experience but it manages to complement the mood and emotion on stage perfectly, thereby playing an important role is driving the story forward. In his note, the Director has mentioned that the focus of his direction was to blend physical movement, visual imagery and music into a visual narrative with multimedia elements, and he manages to achieve just that.

The set is one of the key strengths of the play where the placement of musicians on stage and a minimal use of props add an enriching element to the audience experience. The costumes are beautiful. Use of props is efficient and effortless. The combat scene between Polynices and Eteocles towards the end of the play was so convincingly done that it had me at the edge of my seat. The storytelling is contemporary in style that grips you throughout the play.

The play effortlessly manages to combine contemporary storytelling with classic Greek tragedy. For me this has been one of the best plays I have experienced at the Mahindra Excellence in Theatre Awards this year.