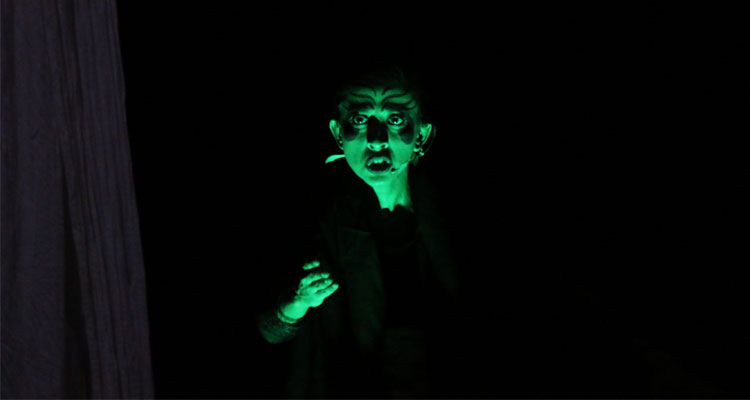 Elephant in the Room: Turning the Myth on its Head

Yuki Elias’ Elephant in the Room on day 3 of the ongoing META festival was a startling and intense wake-up call for audiences, jostling their minds, making them sift through the quicksand of age-old myths. It dealt with multiple identities, a plethora of themes and turned a traditional legend on its head brilliantly. And all this Yuki did alone in a mind-boggling solo taking on many selves, changing voices and accents with her elfin grace and vigorous delivery.

At the heart of the play lay the central folklore from Hindu mythology – the story of Lord Ganesha’s acquirement of an elephant’s head. The senseless violence in the very act of first the chopping off of his original head and then that of an innocent unsuspecting elephant was examined and the ramifications of this act on the Lord himself who had to live being “different” and grotesque throughout his life and on the bereft kin of the killed elephant was conveyed in a fascinating first-ever analysis of this kind.

Ganesha or Master Tusk, as he is known here, comes of age in the story after a journey of self-discovery in a mysterious dark forest where he befriends a curious hunter and spider duo, supposedly his “kidnappers” who are looking to extract a ransom from his father, the almighty Third Eye, while trying to get off a curse which they are saddled with.

The duo, Moorkh and Makadi, are trying to help Tusk locate his lost head in the forest and, during the course of this search, both literal and metaphorical, Tusk comes face-to-face with the dignified, grave, and almost other- worldly artist-sculptor, Wordweight, the father of the slain elephant who gave him his head, grieving silently. From him Tusk learns the power inherent in being able to accept, learn to live with one’s difference with confidence and most importantly, to forgive – the three critical ingredients of hope the play leaves us with.

There is a spectrum of themes entwined in this striking and innovative narrative – that of endangered forests lying hopelessly at the mercy of marauding hordes, animals at the brink of extinction, greed and self-aggrandisement of the powerful, deep conflicts within every family and societal fractures. Yuki is effortless in her management of all these – lighting up the stage with her quicksilver changes from one garb to another through innovative props and garments which she sheds and takes on in meaningful moves – her distinctive style has humour, charm, satire, and an all-pervading sense of urgency to make us embrace the different and those to whom grave injustices have been effected.

The forest is a microcosm of society’s juggernaut and its multi-hued moral universe at once ambivalent, imbalanced, and yet resonant with its own imperfect music. Moorkh, the earthy indigenous hunter, and Makadi, princess-turned-spider cursed by her father for having “dared” to fall in love with a lowly suitor, are refreshingly happy in their shared doom, their predicament reeking of honour-killings in India’s heartlands.

Each animal in the forest has his or her own unique music, the hyena’s piercing laugh and the sagacious cheetah’s fevered chant – the stage-lighting and sound-mixing are perfectly executed, the deep crevices of the forest and its inhabitants’ anxieties at the impending invasion of the Royal Army in search of Master Tusk, coming through in sharp clarity.

The play is a complex coming together of many layers into a striking whole, rich in metaphor, allegory, and carefully-strewn symbols of personal and social malaise. Ultimately, however, it is also a story of love, redemption and acceptance of one another, warts and all.  Master Tusk accepts his father despite what he had done, his experiences in the forest, his transformational meeting with Wordweight at the Isle of Dawn which is precariously and symbolically perched between day and night, have made him into the loveable Ganapati we all know, the animals in the forest are finally without rancour, Makadi is reinstated to her former beautiful self, all having been bathed in the divine light of the Third Eye.

We went home moved, startled, and deep in thought, but with a happy afterglow which only a perfectly-crafted narrative can make us feel.