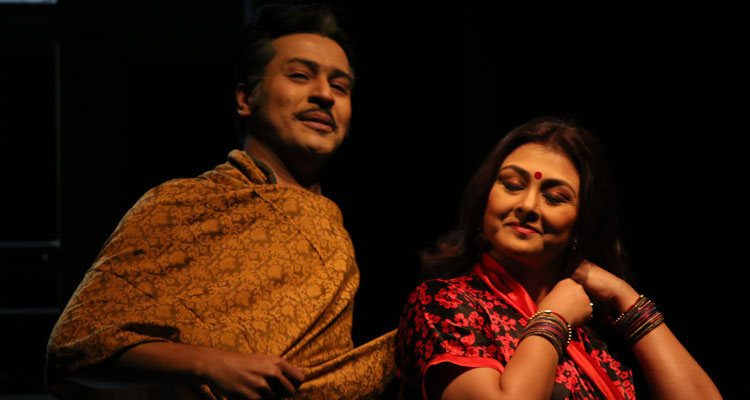 Awddyo Shesh Rajani: There is No Art for Art’s Sake

The two-and-half-hour play, was almost like an onion in the many layers which it peeled off its skin and skein, each strong, intense and complex, focussing on themes as diverse as art and its real meaning, illicit passions, social hypocrisies and the inescapable jaws of the “Establishment”, depicted through plays-within-play, flashbacks and flash-forwards, peppered with sequences of fantasy and dream.

At its heart lay an alarm-bell of a message – the creative artiste’s despair and eternal dilemma – if he is to create pure art, be true to the unadulterated calling of his soul, he is misunderstood and ignored by a base-instinct-inspired audience-mass and if he tries to marry art with popular taste like Shakespeare managed to do and find that perfect formula of artistic excellence embellished with the front-row catering ingredients of romance, lust, and ridicule to strike a chord at the hearts of critics and audiences alike, he could be the target of jealous, sabotaging peers and an intrusive, unrefined governmental establishment.

And so the artiste’s travails are doomed to continue, unable to find that seamless and exquisite rhythm in which he can let his art speak to “his” people while an ideal society indulgently watches.

Awddyo Shesh Rajani tells us the story of Amiya Chakraborty based on the life of real-life playwright Ashim Chakraborty, whose play Barbadhu made box-office history with its “blow-hot romance” between an aristocrat zamindar’s son and a Sonagachi prostitute. Amiya’s (or Ashim’s) Barbadhu was actually supposed to be a sensitive portrayal of a woman who lived as a social outcaste in tight-knit, morally pious early-20th century bourgeoisie Kolkata. In the story, she is supposed to impersonate the role of the “wife”, play “house” for visitors while vacationing with Pratap, the licentious and reprobate scion of landowning aristocracy. In the process she is humiliated continuously even as she tries momentarily to cling to the crumbling vestiges of respectability her dissembling enables while having to uninhibitedly satisfy her “babu’s” lust.

Barbadhu was a progressive play telling a tale of complex passion and yet it was watched by the masses for the wrong reasons – they found it infinitely titillating – the raw passion of the leading pair made audiences breathless in excitement and it ran for over a 1000 nights.

In the midst of this debacle, the creator Amiya stands hapless – he can’t believe his peripatetic turn of fortune – earlier he was impoverished and rejected – his Arthur Miller and Tennessee Williams recreations landing him into deep crevices of debt and making him dependent on the meagre earnings of his loyal, steadfast teacher-wife, Mala. Barbadhu is at once his nemesis and his rescuer – he is driven to depths of misery and shame at becoming the poster-boy of cheap thrills and yet delighted at the final financial deliverance the play offers. In Barbadhu, he also meets Rajani, his co-star, the crucible of all his pent-up passion, feelings and artistic oeuvre. She is at once his muse, the object of his insane desire – the one he wants to possess completely and yet feels inadequate towards. She is the reminder of what he cannot feel for the long-suffering Mala – she fractures his insides and devours him through and through. He is never sure whether she felt the same obsessive love for him – she remains tortured, charming and enigmatic till the chilling end.

The average audience is incapable even of grasping at art’s delicate boundaries and what it cannot understand, it ruthlessly denounces. Vacuous public opinion is the opiate which makes governments take “important measures”, that of eradicating what it finds uncomfortable and outside their comfort zones.

The tragedy of the artiste is brilliantly captured through sequences from Amiya’s plays, a blue horse-motif (emblematic eternally of the artiste’s longing embodied by the mythical Pegasus), flits in and out of the play-within-play scenography. Amiya’s life unfolds in front of us through disturbing theatrical narratives – we understand his small debt-ridden beginnings, his innate cruelty and unquestionable tenderness towards his patient and careworn wife, his startlingly revelatory passion for Rajani and the final denouncement of his art by society.

The end is dramatic – Amiya, driven to ruin by his detractors, performs his Swansong, and acts out a symbolic self-written play about a mad king who wipes out those who can’t sing paeans to him (an indictment against the ruling dispensation which forbade him from performing Barbadhu) – and vindicates the real meaning behind Awddyo Shesh Rajani (tonight is the last night) – and in a brilliant and unexpected tour de force kills Rajani, his lover, inspiration, leading lady, and tormentor, and finally falls dead of a heart failure himself on stage. The entire play, we realise, has been a flashback, told with mockery, poignancy and humour by Bishnu, Amiya’s loyal friend, wingman, and theatre critic, using the reminiscences of his many past dialogues with the misunderstood playwright.

The calibre of acting was superlative – Amiya’s character was depicted in all its shades of grey, black and white in an all-encompassing performance, the pivotal role of the critic delineated with precision; Rajani’s uninhibited passion, and her inner conflicts, Mala’s unbearable pain  – none of these had an extra or discordant note. The audience’s integral role in the life and trajectory of theatre was reinforced strongly as members of the cast came and sat amidst the “real” audiences, mingled therein, blurred lines between the real and  the imaginary as the plays-with-play unfolded.

The set and props – the ever-present tram – urban Kolkata’s recurrent trope – gave the play its dominating theme. Around it, the drama was enacted, the lights dimmed and brightened on cue and scenes from dream and poetic imagination came in quick succession as audiences watched completely engrossed and came up with their own internal interpretations which ultimately is the objective of all art.