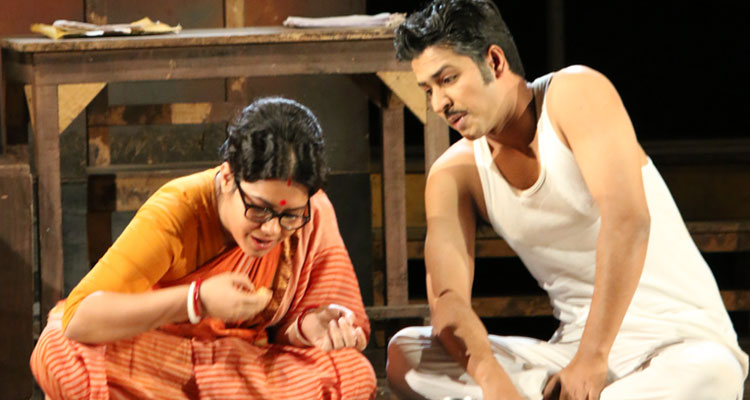 Cults like the fakirs and the bawls feel that sexual energy is the most powerful force that flows outwards all the time, because of which there are manifestations of happiness, unhappiness and death. Barabadhu ran for one thousand eight hundred nights, a full turnaround in all the leading theaters, it created a stir ,it ran packed houses. There were rumors. Some said vulgarity and the blow hot blow hottest advertisements did it. Ultimately the truth had come out. Amiya Chakrabarthy playwright, director and lead actor was passionate about good theatre. He was supposedly the first to pull of a Brecht and Arthur Miller on the stage of Bengal. They had left no mark on the crowds. The memory of these plays faded away from the memory of the audience. He was plagued by recent flops and debts.

Mala his wife comes across his unfinished script The Prostitute and insists he finishes it. Amiya approaches actress Rajani and shares the script with her.She is unhappy with her husband who feels bhadrolok dont work and mocks Amiya ki maal khao na? when he says no to a drink. He wants to know how much he would pay Rajani for the role? Amiya’s fortune change as The Prostitute becomes a massive hit and he begins to develop an intense relationship with his leading lady.  Its now that the personal relationships are dealt with beautifully illicit love, the passionate bed scenes, that become topic of discussion among the crowds, the women feeling disgusted that men and boys are getting spoiled, the audience craving for more. Amiya now confronts his inner demons he wants Rajani to tell him once aami shuddhu tomaar ke hi chayee he is haunted by dreams of a beautiful neel ghoda whom he tries to saddle on. The underlying theme of everyone has his own horse which they want to ride is depicted beautifully in the scenes showcasing the beautiful neel ghoda a horse lost from the harappan times it comes to him every night at his bedside in his dreams. It trots like an angel ,then soars in the air like a falcon ,and drops him on the floor like an unfulfilled dream.

The violin player comes and goes intermittently adding to the shifting moods. The beautiful sets on stage of passengers boarding and dropping off the tram at various stations ,their discussions on the play, the eve teasing, all showcase typical life in Kolkota.

The artistic jealousy of Mala ,tearing her school correction papers, her frustration potrayed in the scene when he brings Rajani home for fried fish are heartbreaking. The professional battles that he faces and the outer turmoil are also dealt beautifully towards the end. You cannot escape death, the transience of all things mortal. Can you light up everything? His experiences unfold as a reverie amid a mythic landscape. His conclusion that no can one escape set roles. The play ends with Amiya urging to rummage through my ashes….to check whether his plays were honest or not? He discovered a  cove of treasure form the deserted island that goes by the name of theatre. The play ends on the note that nothing changes. The show must go on! Violinist plays.