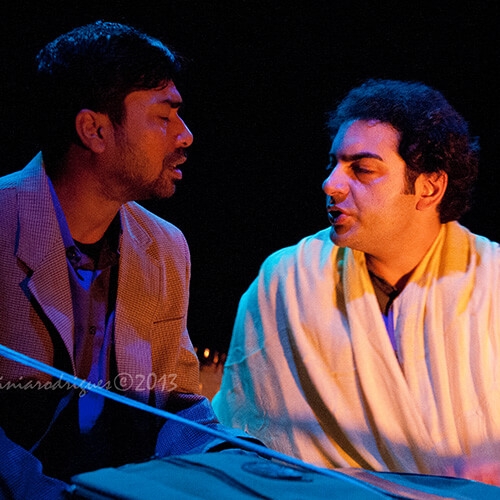 Set against the background of the Kashmir imbroglio, Gasha is an account of the fractured friendship between two boys, a Kashmiri Pandit and a Kashmiri Muslim and their need to affirm their story.

While everything around seemed headed towards a slow collapse, in a shed on an island in the middle of a lake, two boys built their world. Twenty years later, it is quite another past that stands in their way.

Today, two whimsical narrators scramble madly to recreate what happened. Set against the background of the Kashmir imbroglio, Gasha is an account of the fractured friendship between two boys, a Kashmiri Pandit and a Kashmiri Muslim and their need to affirm their story.

Gasha was conceived as a collaborative examination of the Kashmir story, with a particular entry from the perspective of the Kashmiri Pandit. The effort then on has been to tell a complete story, as complete as a story can be, through fragments , imaginations and re-imaginations of what happened one night or what happened after that and before that.

The play has been devised and created through 2012 , with multiple workshops, interviews , visits and a mix of writer-led, actor-led and scenography-led sessions. The team has strived to imagine and represent the multiple realities that exist in this story, ultimately keeping it to just what a story needs to be: a simple story that does not compromise on its inherent complexity.