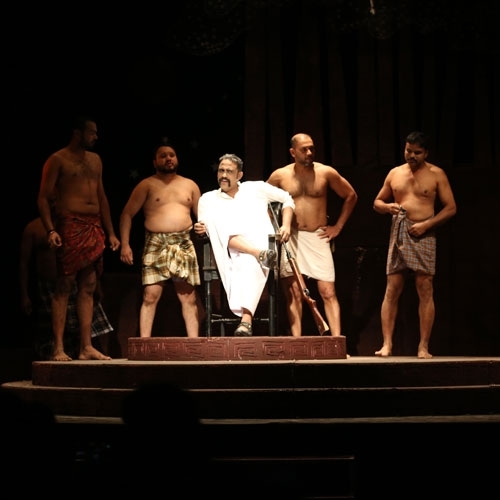 Bhaskara Pattelarum Thommiyude Jeevithavum is a play based on the novelette, Bhaskara Pattelarum Entey Jeevithavum by famous Malayalam writer Paul Zacharia. Thommi, a Christian migrant labourer from Kerala is the obedient slave of his aggressive, tyrannical landlord, Bhaskara Pattelar. Pattelar is a man of many vices and Thommi helplessly supports him in all of his ill deeds. Thommi obeys all orders of Pattelar, from making his own wife sexually available to his master to killing Pattelar's kindly wife, Saroja. When Pattelar is forced to escape to a jungle due to his own misdeeds, Thommi follows him like a pet. Pattelar slowly sheds his tyrannical traits as the play progresses and ends up being killed by his enemies. Though the death of his master should have been a big shock for Thommi, the event releases him from his servility into total freedom as we end the play.

Bhaskara Pattelarum Ente Jeevithavum, a play inspired by Paul Zacharia’s novella was first devised and directed by me in 1996. When UAE based Theatre Dubai asked if I could recreate it for the 2018-2019 KSC Bharath Murali Drama Fest, I enthusiastically agreed. Although every detail of what I had done back in 1996 was clear in my mind, when I started to recreate the play, nothing seemed to work. So when things came to a grinding halt I went back to the original source - the novella and started reworking from scratch to create the version it is today. My block was the result of being adamant about sticking to the 1996 version I had created earlier. Bhaskara Pattelarum Ente Jeevithavum is a timeless masterpiece that allows infinite scope for evolution and contemporary interpretation.

Suveeran is an alumni of the School of Drama, Calicut University, Trichur and the School of Performing Arts, Pondicherry. Recognized as an actor, director and painter, he has to his credit almost 30 plays and 4 short films, all of which have received many awards. He has published articles in leading periodicals in Kerala, many short stories and a novelette and translated 3 plays. Suveeran started his career as a director in Malayalam amateur drama and was noticed for plays such as Agniyum Varshavum and Udambadokkolam. He has received the Sangeeta Nataka Academy Award thrice and was awarded the Mahindra Excellence in Theatre Award in 2011 for his drama Ayussinte Pusthakam. Suveeran was awarded the National Award for Best Feature Film in 2011.