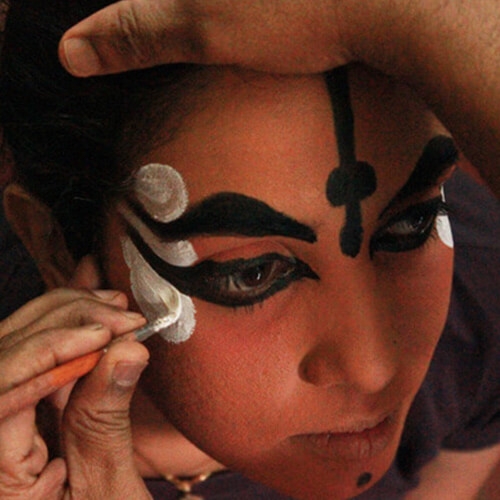 Akshayambara is an experimental play that uses modern theatrical tools and the dance drama form of Yakshagana to create a contemporary narrative that raises questions on female representation and male ownership.

Akshayambara is an experimental play that uses modern theatrical tools and the dance drama form of Yakshagana to create a contemporary narrative that raises questions on female representation and male ownership. A male artist in streevesha plays Draupadi while in a tradition-defying move, a woman is cast as the Pradhana Purushavesha of Kaurava. What happens to the interpretation of gender when a man plays the streevesha and the purushavesha is played by a woman? Who is the real woman and who is the real man? When tradition can accept a man as a streevesha can that same tradition accept a woman as a purushavesha?

After 8 years in English language theatre, I was searching for new inspiration when I met my Guru, the legendary Sanjeeva Suvarna. Training under him for the last two years has been a life changing experience. I am touched by the support that my Guru, teachers at Yakshagana Kendra and my team have lent. From translation to composition, correcting chandas to choosing ragas, in direction and choreography their generosity has been incredible. Words like choreographer, translator, assistant director fail to describe their support. They remind me deeply that art exists only because humanity enables it. I am also grateful to India Foundation for the Arts (IFA) for being an empathetic partner in this journey.