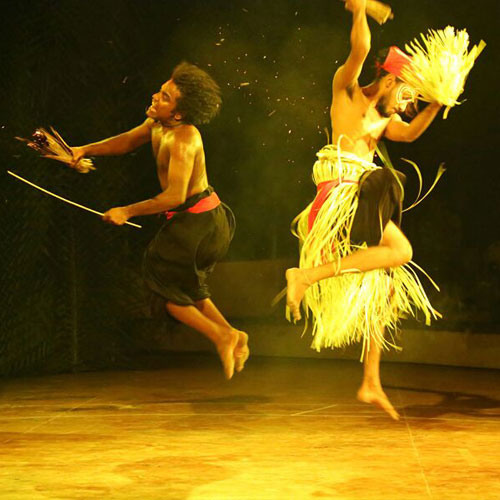 Pulijanmam: A Riot of Colour and Energy

As someone who does not have a natural affinity for watching plays and minimal engagement with the world they belong to, I was hesitant to write a blog for the 14th Mahindra Excellence in Theatre Awards, afraid of being unable to do justice to one of only nine plays selected out of more than four hundred submissions.

Pulijanmam, produced by Dravida Entertainments, is one of many retellings of a classic text by N. Prabhakaran and tells the story of a Dalit man, Kari Gurukkal, and his wife, Vellachi. The play follows the dogged adventures of the protagonist, who is determined to prove himself to society as capable and a master of all martial arts, as he sets off into the jungle to search for a tigers’ skin and tail to help the mad king. The text and play are still relevant in today’s socio-political climate and comments on the caste system, oppression, exploitation and self-worth.

My fears about appreciating the production and writing this blog were put to rest as I watched the mesmerizing opening sequence which explained the evolution of humans from hunters and gatherers, to them creating modes of trade and currency and finally to the classification of people based on jobs resulting in the caste system. With the help of thumping music, dramatic red, yellow and blue lighting and jarring body movements, the actors had the audience fixated.

The contortion of bodies in each sequence, aggressive shouting in Malayalam and incessant drumming conveyed deeper messages beyond the translations that could be read on the screens on either side of the stage. The actors also made use of the side entrance to the auditorium, blazing in with fiery torches and charging between the aisles of the auditorium onto the stage. With the flashing red lights in front, this routinely used side entrance and live music from the balcony above, the production had the audiences immersed in the experience from every direction.

The protagonist craves approval from the community, from the mad king, from himself and his two natures within, and will not be dissuaded by any of the numerous folk gods attempting to stop him from embarking on this journey. Kari and Vellachi’s strong relationship is also tested as she attempts to seduce him into staying back at the village but in vain. Finally, Kari does what he set out to do but this results in his untimely death. The play, while repetitive at some parts, successfully exposes and reminds us of what we all know about society and human nature but often fail to recall and reflect upon. Kari struggles with limitations within his own caste, the traumatic history of his parents sold as slaves, the relentless voices in his head, his love for Vellachi and above all, the unbreakable cycle that casteism perpetuates.