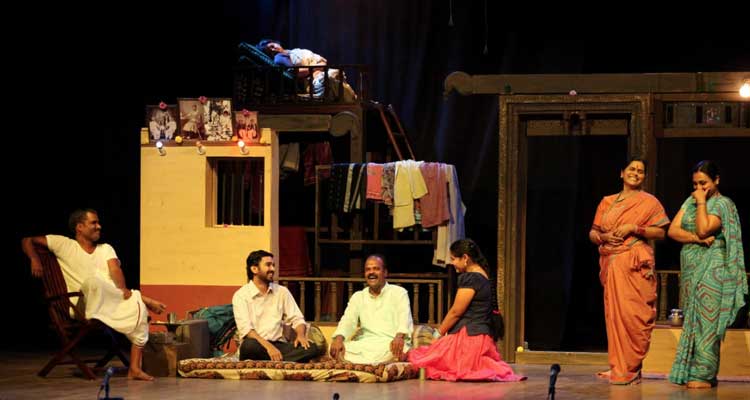 KOLA: A Portrait of a Family

Simple. Gentle. Intense. Piercing into the heart of family relationships and almost insidiously taking you along on this journey, as you transit seamlessly from being a member of the audience to participating in the family drama as one of them!

As the lights fade up to reveal the Deshpande home in rural Vidarbha, you immediately warm to the everyday chitter-chatter that encompasses different generations of the family and helps us ease into their dynamics. A wedding is being planned. In fact, two weddings are being planned, of siblings Ranju and Parag. As their parents go through the bundle of sarees that have been brought home by Parag for different members of the family, including his bride, the network of relationships begin to slowly open up and reveal the power equations between all of them.

Prakash Deshpande’s brother Suresh arrives with his wife Anjali and son Abhay, who has just earned his doctorate in the US and is returning to his family home after 16 years. There is much excitement and bonhomie when they arrive as the preparations for the weddings gather momentum. There is a palpable sense of celebration in the air and a loving grandmother completes the perfect family portrait!

The joy and harmony of the household is abruptly shattered by the brusque entry of Parag who strides through the house without acknowledging his relatives, and generally seems so aggressive that everyone keeps a safe distance. Why is Parag so angry? He seems so full of hatred! The mystery starts building up in your mind as you get sucked even deeper into the drama.

And then home truths start flowing out. A midnight discussion between the two sisters-in-law where they bare their concerns about their sons, the grandmother worrying for a severely ailing daughter and a son-in-law living as an ascetic in the local temple, the elder Deshpande brothers moving through uncomfortable spaces of property divisions, of disrespect and alienation, the revelation that Ranju had eloped earlier and brought shame and dishonour to the family and therefore is now being married to an older divorcee – the skeins of the tightly woven warp and weft holding this family are unravelling and it seems as if the destruction will be irreversible.

As quietly as this is played out, a sudden shift in the dynamics between the cousins Parag and Abhay gently begins to heal and restore the foundations of the Deshpande family.

Done with a wonderful lightness of touch as the cousins revisit their earlier bonhomie and develop a fresh understanding and respect of each other, it deepens your emotional connect with the characters as you too invest in this new warmth.

Parag’s thawing towards his wife Nandini has a delightful touch of humour as he throws his on-going relationship with a village widow at her, but Nandini remains unflappable and reveals a loving, compassionate nature that eventually wins Parag over.

All’s well that ends well but not quite immediately! Running parallel to this story and the story of Abhay’s American love Cynthia, is the impending danger that Parag is involved in the illegal felling of trees and that one day the law will catch up with him. Which is what happens at the end – a police jeep comes to take Parag away as he entrusts the care of his family into Nandini’s hands. As the lights fade out, you step away from the Deshpande household with a sigh, having lived vicariously these past 2 hours through their victories and despair, their anger and aspirations, restoring your own faith in humankind.

The second part in the Wada trilogy, Kola is written by renowned Marathi playwright Mahesh Elkunchwar. On the surface, a simple family drama, the play explores complex human emotions that run through relationships as well as metaphors like the references to the village pond that was once pure and expansive, but has now shrunk, and become muddy and clogged as corrupt developers try to take over natural resources.

The pond becomes the well of replenishment for Parag and Abhay and the scene where they both step out into the night to drink in the beauty of the stars as they sit by the pond, is sheer poetry.

Director Achyut Kumar seems to have done full justice to the script through his artfully designed set, created at different levels to double as seating/ sleeping spaces through the day, an unobtrusive lighting design in sync with the understated tonality of the play, a soundscape that fills us in with what is happening outside our immediate precinct, simple everyday costumes and an acting style that has evolved from “pretending” to “being” – Kola is a heart-warming experience that helps one suspend one’s own concerns and flow instead into the world of the Deshpande family where life isn’t easy. But, when you step away after two hours, you leave with a gentle smile and renewed hope