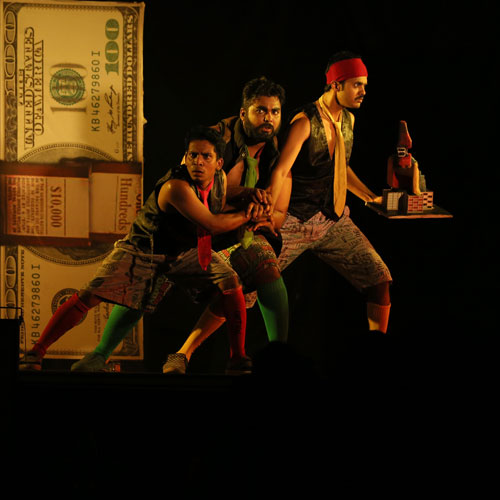 While the world over, people chase a dream of fame, fortune, comfort and luxury, the truth not shown in those glossy billboards of the good life is what it costs, and what is lost to achieve it. Chillara Samaram is a powerfully symbolic portrayal of the social cost of the industrial-capitalist-urban model of development and the insidious and sometimes discreet ways in which its benefits are propagated.

In Malayalam, ‘Chillara’ means coins, or change. But, it also means cheap. ‘Samaram’ means protest. While the play is filled with comic moments, the themes highlighted are serious societal and economic issues.

The premise is simple. There’s a small town in Kerala, filled with simple folk who enjoy simple joys - like making a fresh lemon soda, seeing their customers enjoy it, and earning a small amount of money for the same. Life is simple and good. But the town corporation have other plans. They believe that it’s time for development to come to this tiny hamlet. They have big plans - to build a shopping mall to replace the market that is the heart of the town. To achieve this, they must eradicate the town’s dependence on small value coins and the soul of its people.
What unfolds is a struggle for control over one’s own destiny.

The barter system is depicted - a fish exchanges hands, allowing people to purchase the things they need - soap, cloth, etc.. No money is seen or required it seems. People are happy, albeit poor. But all that needs to change, doesn’t it? For how long will these simple folk remain simple? When will these happy villagers enter the modern urban society that promises happiness for all? When will they leave aside their primitive ways and allow a glittering shopping mall to spring up in place of their disgusting market? That’s the question raised by the villains of the play - the town corporation. With dreams of development, these three characters hope to bring the ‘holy urban’ to this small town.

The play progresses through a sequence of scenes which portray the different ways in which greed, money and the capitalist idea of success and development has pervaded almost every space in society. A father and son argue about how money and time ought to be spent - no point in being an EUB: an educated unemployed bachelor, or pursuing the life of an artist. A salesman of a jewellery store advertises the happiness that gold guarantees. A policeman fines a poor man for smoking a beedi in a public place, while another man smoking a cigarette is let off.

The plays also show how capitalism destroys secularism and the unity of the people - Three characters appear singing an ode to Lord Ayyappa, presumably on their way to Sabarimala. One is obviously a Muslim, adorned as he is with a taqiyah, while the other two are Hindus. Their song has a reference to Vaavar, a Muslim god, whose shrine is a part of the Sabarimala pilgrimage. This scene is meant to depict the communal harmony in Kerala. Immediately, the town corporation focuses on breaking them apart.

But there is resistance. In each scene, there is someone or a group who oppose the movement towards the glorification of greed - the mason who takes pride in his work, the painters who support the defiant son, the farmer who forces the gold salesman to realise the worthiness of the farmer’s toil. These moments of resistance are indicative again of the socialism and communist ideals that run that dominate the political landscape of Kerala.

The workers who resist are eventually broken down and forced to join the capitalist machine - where they are each fitted with uniforms and hairnets, and trained to say, “Welcome, sir. Please visit again,” with comical yet pained expressions on their faces till they are completely assimilated into the machine. But, they break free through the power of their revolutionary songs.

The workers break out of the shackles of their indentured exploitation and return to the freedom of their simple lives and occupations. They do so with the unity and power of organised resistance characteristic of the communist movement. The villains are left quaking and utterly destroyed in the face of this resistance.

Sadly, in today’s India, protests are outlawed, greed and excess are glorified, the urban beast eats the countryside unhindered, the rich get richer, the poor and disadvantaged are forced into a life of hard work and toil with almost no hope of advancement, and the ones who have the power to create change are too busy visiting the mall.

Chillara Samaram exceeded my expectations. I left the theatre in a reflective yet energised mood. The actors deftly threw light on a variety of poignant issues but in a lighthearted way. Each and every one of these actors played their roles to perfection. The audience was in splits through most of the play. And the standing ovation at the end was indicative of the impact this performance had had on those who attended.