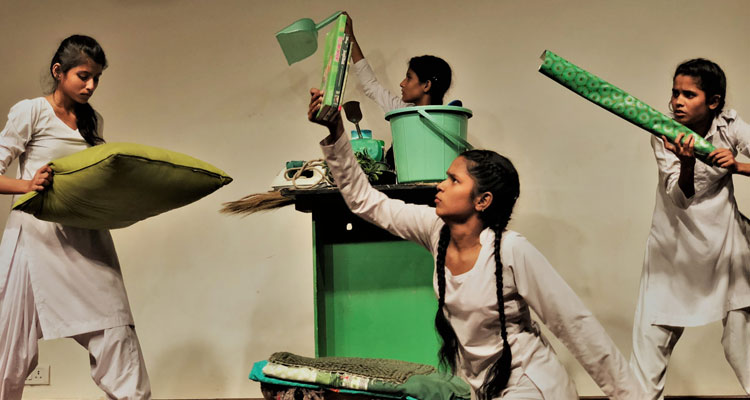 Bhagi Hui Ladkiyan - A fearless experiment in gender, self and identity

As I walked into the darkened auditorium last night as soon as the first bell rang out in the packed Kamani Auditorium lobby, I realised to my surprise that we were actually queuing in to walk up backstage! We wound our way through the wing which opened right onto the stage and there it was – concentric semi-circular galleries for the audience to sit on, constructed on the actual stage surrounding a square platform for what was presumably the “stage” for the evening. The real audience enclosures had been blacked out and closed off with thick curtains. We were in an intimate space and about to begin a journey together. A journey which promised to be both experimental and bold. And that it certainly was!

The empty stage had props – comprising the detritus and objects of everyday life – a mattress, pillows, some tacky sheets, a bucket and a mug, quintessential to India’s vast communal toilets; soaps, shampoo, teacups, combs, a string of cheap beads among other such things completed a fascinating tableau lying in a neat heap on a deserted stage. Suddenly the lights dimmed and the words of a traditional and folksy wedding song, sung in clear bell-like voices, wafted through and in walked four burqa-clad, petite and slight teenage girls. Underneath their thin frames, lay a gamut of strength and talent. They performed for us, their co-participants, for the greater part of an hour even as their hands worked the props in perfect symphony and simulation of everyday living. And they told us their stories – stories of a random day in Hazrat Nizamuddin Basti – which is where they live in real-life and which they appropriated on stage through their words, movements, action and physical objects.

The girls took off their burqas once on stage in an act of liberation – they were the escapees – “bhagi hui” from the suffocating confines of everyday life. Popular advertisement jingles from the 80s, which remain largely unchanged even now, and which define India’s insidiously patriarchal consciousness, played as background music as the girls pretended to retire for the night. I found this juxtaposition particularly striking – the age-old Rasna ad – a cloyingly mellifluous voice of a young girl whining to her mother to serve only what “papa” likes against the calm and sleeping figures of four 15-year-old girls.  And then the stories began. Each story spoke of the struggle to find the self, understand the conflicts of gender and space and the agony of stepping into young womanhood in an environment which is unforgiving of transgressions, however small, petty or futile. The girls spoke of their dreams – some tiny, some big – wanting to ride a scooty, build a home, find a job, walk alongside a boyfriend, or wear “Western” clothes in the same refreshing, innocent way that they spoke of brothers who watched them while they changed clothes behind flimsy curtains in their one-room tenements and made lewd jokes, the same brothers who bullied them with cuss-words if reports of “unwomanly” behaviour crossed their mighty ears, mothers who wanted them silent at all costs, their fears about sex and marriage and of nosy neighbours who watched over their forays “outside the home” like cunning foxes, ready to jump to dire judgements delivered in public at the slightest mis-step. They told us what it meant to be Muslim in an increasingly divisive nation – how they are clubbed with Pakistan at the tiniest hint of communal unrest. They embraced their being Muslim with élan and in the same breath conveyed their love for the stage – “Haan main Muslim hoon, main Quran padti hoon; par mein theatre bhi karti hoon!”  And in these endearing confessions – often contradictory and teased with the self-doubt of adulthood as well as the delightful curiosity of childhood, I saw seeds of hope.

Their narratives were real, flavoured with the sordid blood, sweat and tears of mundane everyday “basti” living – it was clear their lives were hard (there was barely any mention of “fathers” in their tales), and yet they showed us how to find tiny slivers of joy in seemingly extenuating circumstances; we could see they were having fun too onstage. They invited each one of us onto their little platform of space which they had made into a mini basti of their locality and showed us landmarks which they held dear – a Shiv mandir where one of them had apparently eaten a banana - “prasad”- at her mother’s insistence and been cured of a serious brain ailment (deemag ka keeda!), a place where a kind, elderly man often distributed laddoos at 5 am every morning and a designated point from where one could hail an Uber or an Ola – were among the milestones the girls eked out for us with both pride and candour.

I learnt a lot of from these feisty protagonists of last night – they had run away from board exam prep, from parental strictures against acting and “shameful” display of the self, to explore what it is to live without the shackles of gender and class. They didn’t behave like bitter victims trapped in an obscure fate but like spirited travellers on a quest for more. I hope they find their real selves on stage sooner than later.  Each one of the “Bhagi Hui Ladkiyan”, their director Dhwani Vij, their crew and the Aagaz Theatre Trust deserved every bit of the standing ovation they got at the end.