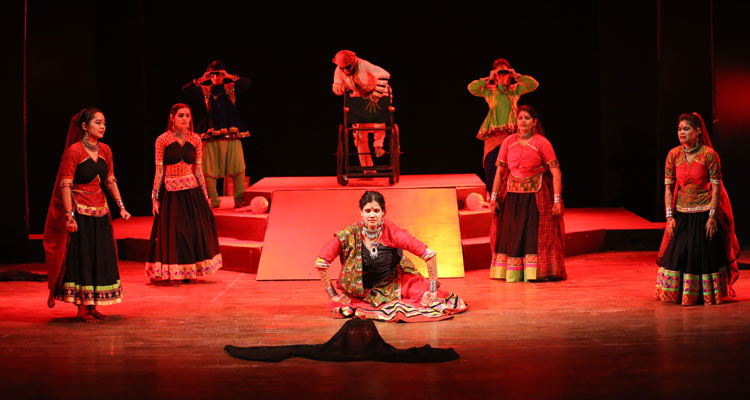 Andha Yug: The Return of Melodrama

As a kid growing up in the 1990s, entertainment options were highly limited. Amongst the all-time family favourites however was the Ramanand Sagar version of ‘Sampoorna Mahabharat’, which made household stars out of already internalised mythological figures. Any retelling of Mahabharata therefore, always takes me back to my nostalgia-clad childhood.

Directed by Dr. Chavan Pramod R. and produced by Rang Prayog, this rendition of ‘Andha Yug’ is the first Gujarati play to make its way at the Mahindra Excellence in Theatre Awards. It finds an interesting space between Gujarati folk, jatra theatre and melodrama. Its narrative is heavily interspersed with contemporary Western dance sequences that flow right within Gujarati folk songs to present a larger-than-life imagination of war, morality, death and blindness.

‘Andha Yug’ opens at the beginning of the end of the Kurukshetra war, when the reality of loss and grief is taking over Dhrutrashtra and Gandhari. The idea of war seems glorified and possibly just, but whose wars do we end up fighting? Who survives and who wins? Whose lives are we willing to sacrifice for victory? As the play travels through the lives of Ashwattama, Yuyutsu and Sanjay, more of these questions take prominence.

One of the most eye-catching elements of this production is the amplification of Gandhari. Portrayed like a chorus, Gandhari’s emotions become the focal point of revenge, which are showcased beautifully through physical movements and dance sequences. The emotional landscape of this play works wonders for Gandhari and the actors live up to this exaggerated reality.  You’ll also be left intrigued by the minimal yet emphatic contemporary twists within the flow of the script. There are ever so direct references to capitalism, fame, glory and power that aid and somewhat neutralise the otherwise melodramatic portrayal. One of the most notable presences in this vein is the United Nations. Any more details on that will spoil the surprise!

The fact that the director has borrowed from multiple styles, allows us to see elements of Mahabharata as more than just the sum of individual stories. While one relishes the extravagance of Gujarati folk through colourful costumes and vibrant dances, the play also brings to life ‘war’, ‘hatred, and ‘morality’ as characters themselves. The play speaks to us loud and clear about the perpetually deepening darkness in our hearts, borne out of the need for revenge and power. It leaves us with an idea that we as humans are the living embodiments of Gandhari’s curse to Krishna.

While the play has strong performances from several actors, it does at times fall short of reaching an emotional peak. Realising that both melodrama and jatra require actors to delineate even unannounced feelings, there are moments where that physical and dramatic effect loses its shine. There is seemingly a lot of scope for Ashwattama’s anger, Yuyutsu’s conflict and Sanjay’s agony to be portrayed as elaborately as the narrative demands. Moreover, given that we are tentatively aware of where the play is headed, there are bits towards the end, which seem elongated. A crisper and tighter closure might also benefit the illusion of the drama itself.

However, ‘Andha Yug’ is a definite watch for the questions it poses and the musical journey it takes you through. Much like traditional folk theatre forms, even this one captures the mind of an audience like a community theatre piece and momentarily transports you out of the proscenium. This play is a reminder of our current times, where we can prophesy a war, envisage the destruction but are somehow unwilling to stop any of it. With fascinating character representations and a wide emotional terrain, ‘Andha Yug’ is a worthy entry to the14th Mahindra Excellence in Theatre Awards.